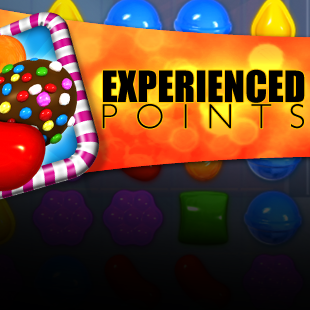 You might remember the whole Candy Crush crap from a couple of months ago. For those of you who have never had your Facebook feed buried in "Aunt Mildred invites you to play Candy Crush Saga" notifications, it went something like this: King made a clone of Candy Swipe, which was itself a candy-themed Bejeweled clone, which was a clone of Shariki. (1994) The actual lineage of the games might be longer than this. After a while it's like a classroom of students who all have the same answers; it gets hard to figure out who was copying and who was being copied from. At any rate, King then unleashed their legal team to shut down games with "candy" in the title, and also games with "saga" in the title. They even attacked Candy Swipe, which clearly pre-dated their game by years.

The whole thing is a reminder of what I've said before: "You can sue anyone, at any time, for any reason - as long as you've got the money."

It's a strange conflict, since they're attacking games based on trademark claims (saying the names are too similar) while the larger gaming culture is talking about their products in terms of cloning (pointing out the gameplay is too similar) and so we've got two different debates happening at different levels. But while we're busy heaping [completely justifiable] shame on King for being hypocritical suckmongers, I'd hate for us to muddle the conversation and end up condemning the wrong things. In short: Trademark trolling and legal bullying are bad, but cloning is just fine. Cloning - taking the gameplay of an existing game and making a new version of it - can be a completely legitimate and healthy way of doing things.

Cloning has something of a bad reputation. "Clone" is often used as a pejorative: World of Warcraft clone, Call of Duty clone, Diablo clone, Minecraft clone, or even the unintentionally ironic "Bejeweled clone". It's often used as a shorthand way of saying "this game has no new ideas and no reason to exist". But the word is also used in a broader, more descriptive sense: "Game A plays a lot like game B and is obviously designed to appeal to the same audience."

The problem is that not all clones are created equal, or for the same reasons. Sometimes a game is cloned because an artistically bankrupt company notes a trend and mindlessly copies a successful design to cash in on it. Sometimes a game is cloned because a developer loves the original work but has an idea for how it could be done better. Or maybe they just want to make a similar game, but without some features they find really annoying. Or maybe they just want to give it some artistic flair.

One type of cloning is shallow, exploitative, cynical, and artistically bankrupt. The other kind of cloning is flattering, inventive, and pushes the medium forward. And the line between these two types of cloning is completely subjective. One person might look at Path of Exile and say it's an empty Diablo clone. Another might conclude that it's the game Diablo III should have been. Is The Old Republic a World of Warcraft clone? It's certainly got the same underlying mechanics, but the games are different enough that it's possible to love one and despise the other. Cradle of Rome, Four Elements, Puzzle Quest, and Candy Crush are all match-three games and obviously an attempt to cash in on the Bejeweled craze, but they're all so completely different in pacing, gameplay, and presentation that it would be hard to confuse them.

Clones are how genres evolve. Clones are how we weed out bad ideas and discover new possibilities. Yes, the cloning situation on mobiles is really rampant (mostly due to how simple the games tend to be, and how fad-driven the market is) but that's not a terrible thing. Sure, sometimes good people get cheated and rip-off games do better than their source material. That's not great, but it's an unavoidable cost of an open creative medium where there's money to be made.

We wouldn't have Minecraft if not for Infiniminer. Shariki was the original match-three game, but it was also ugly as hell, and I'd rather play the less-innovative Bejeweled. Dune invented the Real-Time Strategy genre, but it was Warcraft that turned it into something amazing. (And they didn't really succeed until the second try.)

The crime of King isn't that they stole the Candy Swipe design, it's that they tried to drive their competition out of the market with lawyers. Cloning is good. It's good for customers, and good for the industry. While it's fine to condemn no-talent copycats, let's make sure we don't condemn the practice of gradually evolving gameplay and artistic remixes. That's where the best games come from.

Shamus Young is the guy behind Twenty Sided, Spoiler Warning, and How I Learned.