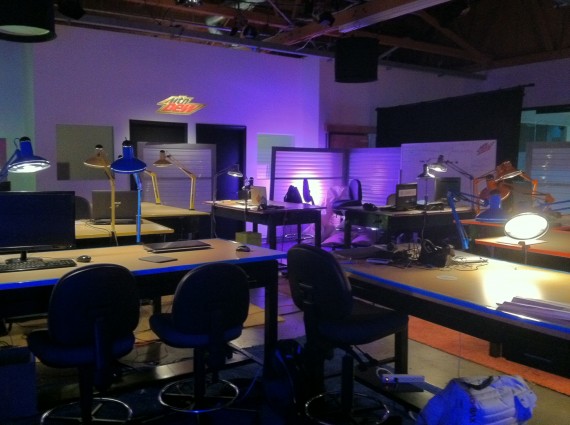 It would have been bad enough if GAME_JAM turned an actual game jam into this kind of faux-reality drama, but they actually aimed even lower. They tried to manufacture sexism-based drama. As if we didn't have enough of that in our hobby. One of the questions they asked Robin Arnott was, "Do you think you're at an advantage because you have a pretty lady on your team?" This is classic "have you stopped beating your wife yet?" type question. If I say "no" then it might sound like I don't value her as a member of the team. If I say yes then I'm reducing her to a pretty face and ignoring her technical and artistic abilities. A proper answer is likely to be long and frustrated and easily misrepresented in editing. Keep in mind the "pretty face" in question is Adriel Wallick, who left her job programming weather satellites so she could make quirky, experimental indie games. It's like having Neil Degrasse Tyson on your team at the science fair and having someone ask how having a "black guy" impacts your chances of winning. It's mind-bogglingly offensive.

Meanwhile the other teams were asked, "Two of the other teams have women on them. Do you think they're at a disadvantage?" It's pretty clear the organizers wanted to work this angle - painting game developers as either sexist or preoccupied with gender - as a way to generate conflict. There's no winning move here.

This is the kind of drama the show was going for. Gossipy, mean-spirited, and inflammatory. Imagine if the plan had worked. The resulting show would have turned these talented, daring, slightly eccentric artists into a bunch of bickering Gen-Y gamers. It would have reinforced this notion that gaming is awash in sexism and that gamers are mostly howling man-children. It would have hurt their careers, and it would have made our entire hobby look bad. And for what? A couple of hours of shallow YouTube entertainment and some absurd Pepsi sponsorship?

The happy ending (happy for us in the audience, not for the developers) is that the developers banded together. They'd been organized into competing teams, but instead they stood as a group. They refused to answer those gotcha questions. They didn't sink to bad-mouthing people or lash out when their projects were shoved aside. They stonewalled and refused to sink to the level of the organizers. They were here to make games, not drama, and no promise of "exposure" was going to make them compromise their ideals.

I find this really admirable. I know that in my 20s (which was during the Clinton administration, if you're curious) I would not have been this media-savvy. I'm sure I would have blown the "pretty lady" question when the time came. There are just so many wrong ways to answer that. ("No comment" and "F you" are really the only correct answers in this context. Anything nuanced is just asking to be slandered by sound-bite editing.) Maybe I would have gotten mad and tried to fight "the system", which could have just been spun into another narrative. ("Entitled idealist can't work with others.") But they not only saw through the manipulation, they also correctly identified the only proper response, which is non-participation. They refused to take part and denied GAME_JAM the chance to make any narrative at all.

Even after the event, the devs are showing a lot of integrity. They're talking about what went wrong, and not using the fallout as a chance to promote themselves and their own projects. (Which would be fine if they did. They entered because that's what they wanted, and the fact that they're willing to walk away with nothing rather than muddle their message says a lot.)

It's sad that GAME_JAM didn't work out. I would have loved to see some clever people come together and build some games. But the rebellious teams saved us from a worse fate. The industry isn't perfect, but it's also not always the zoo it seems to be. There are good people who are in it for the love of games, and their efforts give us countless hours of entertainment whether we watch them make the games or not. Thanks to the devs who put principles above publicity, and stood with each other instead of bickering for the cameras.

Shamus Young is a programmer specializing in procedural content. You can read the really long version of his story if you're interested.