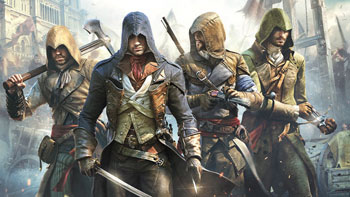 My concern (and again, this is just guesswork on my part based on my own experiences) is that just slapping female assassins into the game world would create a lot of minor little problems that would need to be fussed over to make things look right. Depending on where the female model is anchored to the world, her hands might float a few inches away from the ledge she's supposedly holding onto. Or perhaps her feet poke into the wall as she climbs. Or maybe she sticks her hand inside her hip when she's supposedly grabbing stuff from her belt. Or her arm passes through the neck and shoulder of her victim when she grabs them from behind to shank them, as you do in these games. And don't get me started on all the horrible ways things can go wrong when you've got flowing fabric (like capes) that need to obey physics but not clip through the model or end up humorously flipped over their head.

I'm not saying these problems will happen. I'm saying these are the types of problems you might run into, and whether or not they're a big deal depends a lot on the circumstances and where the camera is.

The point is: It would take a lot of time to go over the massive animation list and tweak them to fix problems like this if they arise.

I can see how just throwing together the female models in a "couple of days" could backfire. Imagine if Ubisoft released the game with both male and female characters, but the females were slightly glitchy, had fewer customization options, and had less variety in their animations. People would (rightly) say that the females felt tacked-on, like an afterthought.

But this whole argument over whether it would take "two days" or would be "double the work" is kind of missing the point.

In Assassin's Creed Unity, the multiplayer is designed so that you always see yourself as the main character and your friends as "other guys". I think that's a ridiculous way to handle things. It would be like a game of Left 4 Dead where every player sees themselves as Francis, and the other players as Bill, Zoey, and Louis. That's goofy and counter-intuitive. Actually it's even dumber than that. In Assassin's Creed Unity we're all Francis, but we're all Francis with slightly different hats on. That's... beyond lame.

They began with a system that made no sense, and fundamentally ran counter to what people want and expect from "customizable multiplayer". This reeks of creative clashing. I suspect we have creative team that was dedicated to their single-player ego fantasy and management that imposed multiplayer because they heard that multiplayer was a big deal these days.

Yes, if they had even thought for a second about their female audience they would have found time and money in the budget to do it, and do it properly. But if they were thinking clearly they wouldn't have designed such a nonsensical and confusing multiplayer system to begin with. They didn't leave females out when they ran out of time or money at the end of the project. They left females out at the start, when they designed their everyone-is-Francis multiplayer.