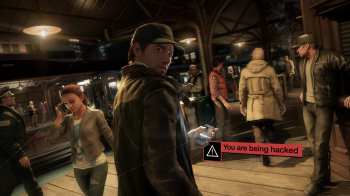 But you can't make a claim that you didn't downgrade the quality of the game with a straight face. That's not just lying. That's stupid, obvious, flagrant, insulting lying. That's "I don't respect you enough to invent a plausible lie" level of lying. We have screenshots of the game looking better than it does now. And they didn't come from hackers. They came from you.

The PC version does indeed contain some old, unused render settings that were deactivated for a variety of reasons, including possible impacts on visual fidelity, stability, performance and overall gameplay quality.

Technically it's not "unused". It's "used only for marketing". And by "old" we mean "less than a year ago". But I quibble.

Again, I understand. Maybe the team was able to get the game running smooth for that tightly controlled E3 demo, but once the engine settled down you realized you couldn't maintain that quality during the fast-moving open world sections of the game. Open-world city games are the absolute most challenging types of environments in a lot of ways. Getting all that scenery from the disk into memory just in time - without having a few frames where the player finds themselves looking at an empty space where some objects should be - is hard. Keeping things visually diverse without running out of memory is a technical and artistic challenge. And this is to say nothing of all the challenges that come with populating and animating everything when assets are appearing and vanishing from the world at a constant rate and the player is moving fast. It's like trying to put on a stage play for a running audience. You don't have a backstage area to work with. They can go anywhere at any time and you have to have the scenery ready.

You're in a tough spot and technology is a pain in the ass sometimes. I get it. But stating things that are clearly untrue won't fix that.

Modders are usually creative and passionate players, and while we appreciate their enthusiasm, the mod in question (which uses those old settings) subjectively enhances the game's visual fidelity in certain situations but also can have various negative impacts. Those could range from performance issues, to difficulty in reading the environment in order to appreciate the gameplay, to potentially making the game less enjoyable or even unstable.

Really? You're going to claim that the mod "subjectively" enhances quality? You're saying this is only subjectively better than this? You know it's not true. You know that we know that it's not true. And I know that you know this. We are all completely aware of the lack of truth here, but you said it anyway. It takes a special kind of dysfunction to lie to someone when the lie is just as unpalatable (and far less plausible) than the truth. Despite what people have been taught, you don't actually have to act this way if you work in PR.

Everyone excuses stuff like this by saying "that's just PR". As if there's no difference between slick, calculated PR and contemptuous, clumsy PR. If I'd been given the job of justifying this move to the public, here's how I would have handled it:

"While the mod in question may indeed offer improved visuals to some users, we want to stress that this isn't endorsed or supported by Ubisoft. The diverse configurations of PCs made it infeasible to test these settings in time for a concurrent launch with the other platforms."

(I want to stress this "quote" is mine, not from Ubisoft. I'm offering it here as an example how to communicate without perpetrating falsehoods at the rate of twice a sentence.)

This statement has lots of things going for it: It acknowledges the mod without endorsing it, and stresses the mod is "use at your own risk". It gives PC gamers something to ponder. Sure, maybe the game could look better, but do you want to wait until months after the PlayStation and Xbox launch to get it?

Most importantly: It's very likely the truth.

Addendum: It has been pointed out that the really big demonstration for Watch_Dogs that produced all of the amazing screenshots was at E3 2012, not E3 2013. That was before the devs had access to the final specs of the next-gen consoles, and two years is a long time in game development. It still doesn't excuse the contemptuous PR, but it does explain how we wound up with such a graphical disparity in the first place.

Shamus Young is the guy behind Twenty Sided and is looking for a mod that will make Aiden Pierce less tedious and boring.