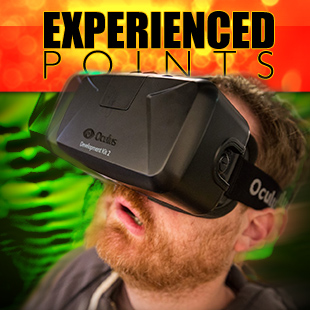 What's the worst thing that can happen to your physical body from playing a videogame? A thumb blister? Bashed in the face with a Wiimote? I suppose you could hurt yourself taking a bad step in Dance Dance Revolution. Still, gaming is usually recognized as a really safe activity. Statistically, I'm sure gaming is safer than walking around a city or cooking dinner, in terms of hours-to-injuries.

But now we have a new gaming danger to add to the mix: VR sickness. Like a thumb blister or taking a WiiMote to the forehead, it's uncomfortable but not particularly dangerous by itself. But this is a new threat and human beings are really bad at appraising new threats. We're both drawn towards the unknown and fearful of un-appraised dangers, which makes us kind of goofy around new technologies. Like kids at the edge of a new waterhole, everyone wants to swim but nobody wants to be the first one to jump in. I'm fully expecting a round of overblown, hyperbolic, fear-mongering, click-bait-y articles on VR sickness when the Oculus Rift goes commercial. That sort of thing is probably inevitable, but the best defense against that nonsense is to simply talk about it openly.

And speaking of hyperbolic hand-wringing, I suppose I should put up a disclaimer: I am not a doctor or even a researcher. I'm just some guy who has owned an Oculus Rift dev kit for a few weeks and has spent some time experimenting with and writing VR demos. This is not the final word on VR sickness. This stuff is still being studied, even as I'm writing this. Nothing below should be taken as medical research or advice. If you treat it as such than you deserve whatever ridiculous thing happens to you.

With that out of the way...

VR sickness is the result of a disconnect between your eyes and your vestibular system. (Informally known as the "inner ear".) Proprioception (your sense of where your body is and what position you're in) is also involved. When these systems disagree, it can be uncomfortable or sickening. If your eyes tell you you're moving and the rest of your body disagrees, it can result in sickness.

For me, the worst culprit is when the field of view moves apart from my head. For example, if you use the mouse or a joystick to turn left or right in the game. Turning with my head is fine, but using something else to turn which way I'm looking is really nasty.

The other major trigger is when I try to use demos made for the early Oculus Rift versions that don't support head translations. If I move my head sideways and the view doesn't change, then it feels like the world is "glued" to my eyes (which it basically is) and that feels bad. This problem is fixed in newer models, as long as the game designer doesn't do anything stupid. (Tip: Yanking the camera away for a cutscene is a huge no-no. I'd literally rather be slapped in the face.)

Who is susceptible to VR sickness?

The wikipedia entry on VR sickness lists a bunch of vulnerabilities, and in my experience none of them ring true. That's not to say the points are wrong, only that this is something with lots of variation and many exceptions.

I've been playing video games since the 70's. I've played everything from flight sims to shooters. Some people claimed Descent (1994) made them sick, but it never bothered me. I've played games on small screens and huge CRTs. I've played in the dark, late at night, when low on sleep, and never got sick. My only risk factor is that I get migraines if I watch something with a lot of strobing effects. (Sidenote to game developers: Please consider making an option to turn those off.)

So you would think that I should be immune - or at low risk - for VR sickness. But I played the first fifteen minutes of Half-Life 2 and it ruined me for the evening. The "fast" walking speed and the required mouse-turning were brutal. I didn't even do anything fast-paced. I just took the gentle walk from the train to Barney. I doubt I spent more than ten minutes with the game, and I felt sick for an hour after I took the headset off.

In contrast, my daughter has all the risk factors: She has a seizure disorder. She can't watch TV in the dark. She can't use a CRT, and even flickering fluorescent lights make her dizzy. Yet she didn't have any trouble with Half-Life 2. She plowed through the opening of the game and even did a bit of jumping and shooting before she called it quits, and was fine afterwards.

Who is susceptible to VR sickness? I don't think we know.