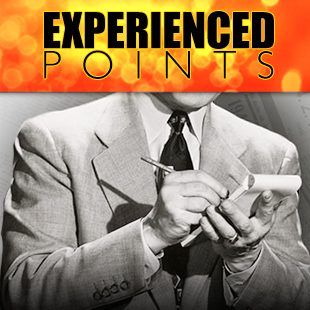 So Joystiq is apparently closing. And The Escapist let some people go a few weeks ago. I know it's considered kind of lame when gaming journalism spends its time talking about gaming journalism instead of games. And I get that. But some interesting stuff is happening right now and I think it's worth talking about. And some interesting stuff is about to happen, and I want to talk about that too.

But let me start by asking you a question: Am I a game journalist? This probably sounds like a stupid question. Some people would insist that I am, and other people would be offended at the idea of me running around calling myself a journalist. And both of them would say the answer is obvious. And both of them would be sort of right. Because gaming journalism is really strange.

I have lots of game journalist friends, I write a weekly opinion column at a prominent gaming site. (I'll bet you're smart enough to guess which one.) I get review copies of games. (Less these days. Publishers don't appreciate my habit of writing about games a year after they come out.) I basically talk about video games for a living. On the other hand, I'm a programmer by trade, I've never been to J-school, and I've never written a single news story or assigned anything a review score.

If we were talking about old-school print or broadcast journalism of the last century, then the answer to "Am I a journalist?" would be obvious. In old media, there is a really clear line between news and opinion. News anchors and reporters report news, while the likes of George Will and Paul Krugman offer opinion and analysis, and the two systems are clearly delineated. In the paper, the content appears on totally different pages and in broadcast they're often completely different shows. Krugman doesn't read the news and reporters don't usually share their personal views. (At least in America. I wouldn't be surprised to find out it was different elsewhere.)

But in games that line just doesn't exist. The centerpiece of games journalism - the reviewing of games for consumers - is unavoidably subjective. You can't very well review a game without giving your opinion. This makes gaming journalism inherently weird. There's no clear line between factual reporting and opinion reporting. It's all one big soup of information, all mixed together. The same people do both jobs, at the same time, and often in the same space.

More importantly, gaming journalism is more intimate and connected with the audience. In the newspaper, it's rare to care or even notice who wrote any particular article. They seem to come from some unfeeling computer at the heart of the printing press. But in gaming, it's completely normal to see bits of personality injected into an otherwise straightforward news items. An author might end an article on a studio closing by saying, "Hopefully these developers land on their feet. Best of luck to everyone who lost their jobs, and let's hope the layoffs end here." That would sound crazy in a newspaper, but in gaming it's more or less expected. Newspaper never directly engaged in discussion with their readers, except to print a few letters without comment. In gaming, there's always a thread attached to an article and authors frequently show up to discuss things after the article runs.

A hundred and fifty years ago, newspapers were growing like crazy. Most big cities had several competing papers. Some were partisans, blatantly supporting one political ideology or the other. Then radio came along and took a bite out of the news business. They started running newsreels in movie theaters, which further filled the audience desire for information. After that was television, and it became the centerpiece of entertainment and information distribution. The newspapers had to consolidate. Over time, the four or five warring papers in a major city were whittled down to one or two. This process took decades, which probably eased the pain for everyone involved. Slow death like this is generally a little easier to bear because you don't have to fire people in large groups. Often you can get away with waiting for someone to retire and just not replace them.

But then the internet showed up and devoured a bunch more of the newsprint business. And here is where things get interesting. I really thought the idea of a newspaper would be dead by now, but it's not. Instead, the local papers are vanishing and being replaced by ever-larger regional papers. The partisanship is all but gone. (Well, I'm sure it's still hiding in the margins. This is a system built by human beings, after all. But it's no longer overt.) Papers need wide appeal, so they can't afford to alienate their base by openly embracing one political party. So the days of anarchic warring voices has been replaced with huge, far-reaching, stately newspapers.

The reason I'm talking about this now is that it looks like video game journalism is going through that entire process at a ridiculously accelerated rate. What took 150 years for newspapers has taken gaming journalism about 15. In the early 2000's, gaming sites were numerous, small, and usually dedicated to rabid communities. A few of them won out and became the big dogs.

And now a new format (YouTube) is eroding the audience.

But just like the internet didn't kill the newspaper, I'm sure that YouTube isn't going to kill traditional gaming news sites. In 10 years, we'll probably have fewer sites, and the survivors will be really big ones with lots of broad appeal.

So while I think I have a pretty good handle on what's going to happen in games journalism, I still have no idea if I'm a journalist or not.