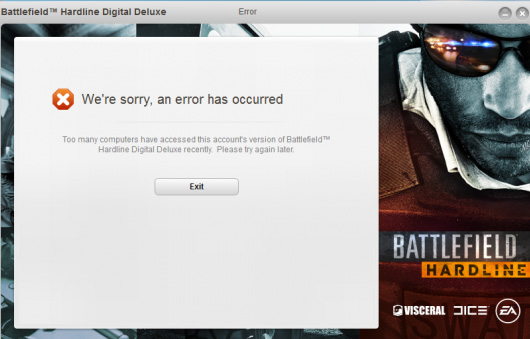 So the news last week was that Battlefield: Hardline has DRM that locked players out of their game while they were trying to do hardware benchmarks and swapping out graphics cards. It's an old, largely discredited and greatly maligned form of DRM that most other publishers - even DRM-obsessed Ubisoft - stopped using a few years ago. But here is EA, still using it and acting like the last 10 years of DRM-driven PR disasters and financial waste hasn't happened.

As I read about a system like this, I can't help but wonder who it's for. Even if it works perfectly and never generates bad press, a system like this costs money to author and license. Then it costs more money to run the servers that track hardware changes and authorize the game on each computer. EA isn't the sort of company to give people money out of the goodness of their heart. If they invested in this DRM system it's because they think it will protect them financially.

(A common fig-leaf excuse is that the publisher "knows" that DRM doesn't work but they put it in anyway to placate the dumb shareholders. Note that since this DRM wasn't disclosed until it failed, that excuse doesn't work here. Not that it ever really "worked".)

So EA believes this system will either block pirates or second-hand sales. Let's humor them. Let's assume it's actually doing that. Let's look at the Battlefield: Hardline player this DRM is supposedly aimed at. Let's call him "Brandon". What sort of person would Brandon need to be in order for this DRM system to be effective against him?

1. Brandon isn't a pirate. After all, if he were, he would simply go to the torrents and download the game without any hassle. So therefore Brandon must be motivated to have a proper, legal copy of the game. Also important to note that ...

3. Brandon isn't willing to pay full retail price for Battlefield: Hardline. Either he's sharing a single Origin account with friends so they can all have access to the game or he's buying a used copy by paying someone else for an Origin account that has Hardline on it. Except, both of these options are still technically piracy. They're just really crappy and inconvenient forms of piracy. But whatever. Brandon feels the need to pay someone for access to the game, or to split the cost with other people. This is a lot of trouble for someone to go through, since either legitimate buying or direct piracy are both easier ways to get your hands on Battlefield: Hardline. 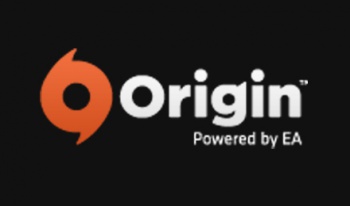 4. Brandon uses Origin. This DRM seems to be built into Origin (it pops up when you try to launch the game, and the window is clearly spawned by Origin. Which means Brandon is someone with access to a modern PC and lives in a country where Origin is available. Despite this...

5. Brandon doesn't care about Origin's features. You can't very well enjoy the benefits of having an Origin account if you share that account with multiple other people. No friends list. No achievements. No gamer profile. If you're sharing an account with other people, then only one of you can be logged in at a time. Cloud saves can be used, as long as you and another person aren't both trying to play though the game at the same time, because otherwise you'll end up overwriting each other's saves. So maybe Brandon doesn't care about single player. But that's kind of odd, because...

6. Brandon doesn't care about multiplayer standings. Would you want to play a multiplayer game where you share standings and unlocks and loadouts with another player? I wouldn't. Also, the fact that only one computer can be logged into an Origin account at a time means that Brandon must be willing to take turns with the other people on this account. Either someone else plays the game until they're sick of it and then Brandon takes over, or they each get a few hours of the day.

So Brandon is a person who refuses to pirate, refuses to pay retail even though he can afford a PC, but is willing to share an Origin account with other people, even though doing so will compromise both the single-player and multiplayer of Battlefield, and will involve a lot of hassle. I'm not going to say that Brandon doesn't exist, but if he does he's a very, very rare sort of player. There are so few it's just not worth it to go after him.

There are probably as many Brandons in the world as there are copies of Battlefield: Hardline that got accidentally crushed by a forklift while being stocked at Wal-Mart. Would it make sense for EA to spend a bunch of money reinforcing their retail boxes so that they can't be crushed in shipping? Of course not. Neither does it make sense to set up hardware tracking servers to spy on and lock out the hypothetical Brandons of the world.

Origin itself is already DRM. There is no need to spend extra money adding more layers of complexity to that. If EA was run by people who understood gaming, this "feature" wouldn't exist. It's a waste of money and a source of bad press.

Yes, this has been said before. I think it's worth saying again. I don't want EA to ever be able to claim that customers "don't mind" this sort of dumb irritation because we've stopped complaining about it.