This column is being written on Sunday, and will go live on Tuesday, so if anything is wrong or out-of-date then understand this is a fast-moving story and Valve is talking with the community even as I'm writing it. (Editor's Note: Valve has decided to abandon the paid mod program).

Skyrim - like the previous Elder Scrolls games - is a game with a huge modding scene. There are over 40,000 mods available. (Although the counts differ whether or not you're looking at the Steam Workshop, or elsewhere.) Last week, Valve announced that they were setting up a system where authors of Skyrim mods could choose to charge money for them.

I'm a huge fan of Skyrim mods. I've logged over 1,000 hours in Skyrim, and the vast majority of my time has been spent playing a heavily modified version that's radically different from the default game. I have no problem with these creative people making money. In fact, I'd love it if they got paid after making such drastic improvements and modifications to the game. But the system Valve is proposing is horrible, unfair, and filled with destructive incentives.

The first problem is the cut. If I pay a dollar for a mod, Valve takes 30 cents. Then Bethesda - the company that created Skyrim - takes an offensive 45 cents. The person who created the mod gets a measly 25% cut. I think both companies are taking far too big a bite, but it's the Bethesda cut that I find so outrageous. Bethesda does not have any reason to be taking so much. If they want to make more money on the Elder Scrolls, fine. Release some new DLC. Raise the price of Skyrim. Whatever. But here they're taking loose change from essentially indie developers who thus far have been adding value to Skyrim. The mod money isn't going to amount to much in the grand scheme of things to a giant developer like Bethesda. This is like a rich man demanding a cut from the impoverished street buskers that play on his street. You can argue that he has a right to demand the cut if you want, but its still a stupid thing for him to do. The money is trivial to him and massive to the creatives he's taking it from. 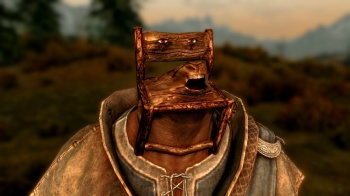 Worse, a lot of these mods exist to fix problems that Bethesda created in the first place. The most popular mod is SkyUI - an interface overhaul to correct for the fact that the Skyrim UI was designed to be used with a controller on a television and is infuriating to use with a mouse and keyboard. The #3 mod right now is the Unofficial Skyrim patch, a collection of hundreds of community bug fixes to repair broken physics, broken quests, interface annoyances, broken dialog, and numerous visual flukes. Bethedsa never got around to fixing these bugs, and now that the community has come together to repair this mess Bethesda is demanding a cut. That's like starting a fire and then demanding a payment from anyone who tries to put it out. There's being greedy, there's being a thoughtless and tone-deaf corporation, and then there's just being a straight-up asshole to your customers and fans. If anything Bethesda owes these modders, not the other way around. This is effectively the DLC scenario we've always feared: Developers charging us for bug fixes. No, it's even worse than that. It's developers charging us for bug fixes they couldn't be bothered to make.

But even if Valve was taking a modest 5% cut and Bethesda was taking nothing more than night courses in debugging their software before release, this system is still bad and twisted. Many mods are collections of other mods. Or simply a slight change to another mod. Or they have other mods as a prerequisite. That's fine when everything is free, but it becomes deeply problematic once money is involved.

When you install a mod, you naturally get all the textures, models, and scripts required to make that mod work, and there's nothing stopping you from turning around and doing whatever you please with those files.

Let's say you release a mod that adds a single helmet to the game. In the days where everything was free, then there was no incentive for me to take your mod and put my name on it. If I did that, then I'd have to deal with all the dumb emails from people who had trouble getting it to work. (Modding gets really complex once you have fifty or so mods running, and crashes and conflicts are common. Check the comments on a mod and you'll likely see lots of, "Help I get some obscure error when I install this." kind of messages.) If I steal a mod I'm just going to end up giving free tech support for no personal benefit.