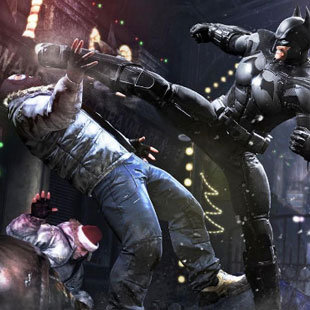 We're going to talk about what 50 Shades of Grey and Batman: Arkham Whatever have in common, but first let me tell you something about myself that I'm not very proud of: When I see a news story about some guy who shot a store clerk and made off with fifty stupid dollars, or a teacher who molested students, or a cop that used his power to abuse someone and then cover up his crime, I always think, "Man, I'd like to have a baseball bat and ten minutes alone with that asshole!"

I'll bet right now you're reacting one of two ways. "Oh Shamus, how barbaric! I thought you were a nice guy!" and "Of course you do, everyone feels like that when they hear these stories." The thing is, I fully recognize this is a brutish and borderline atavistic response to criminality. It's not even rational. It would be barbaric (and unjust) to beat up unconvicted criminals. More importantly, I'm a middle-aged asthmatic and if I did end up in a room with a criminal, I'm probably going to be on the receiving end of the beating, not the other way around.

So this desire to punch criminals in the face is silly, irrational, and useless. And I know this. But that doesn't stop me from feeling that little surge of anger when I hear about cruelty and injustice. This is why I love Batman so much. It really does soothe this agitation for me. I can't do anything to stop the criminals of the world, but I can take out my frustrations on these virtual thugs and make myself feel better so I can put my mind back on useful tasks.

I'm sure the Jack Thompsons of the world would say something like, "This game promotes vigilantism, pugilism, and bad cosplay. It sends a dangerous message to people that they should take the law into their own hands." I really hate these "this sends a dangerous message" arguments, because they're based on the worst sort of sanctimonious arrogance: I can see this game for what it is, but those dumb peasants out there will probably mistake it for advice from their Life Coach and mindlessly enact whatever they see on screen. The moral scold making this argument seems to think that the rest of the world is too stupid to be entrusted with complex messages, moral ambiguity, or things designed to offer cathartic release. It's also the reason these arguments are always so heated, even if the critic isn't calling for banning something. The kernel of the argument is condescending by nature, which is why you see the "Lighten up, it's just a game!" defense so often.

Yes, I know this argument is old and tired to anyone who has spent more than ten minutes as part of gaming culture, but I wanted to point out this isn't the only place it happens. Which brings us to 50 Shades.

Critics say the book "promotes unhealthy relationships", which sounds a lot like people claiming a game will teach players to murder people. Portraying something is not the same as promoting something. More importantly, this argument presumes the audience is just a bunch of dumb cattle.