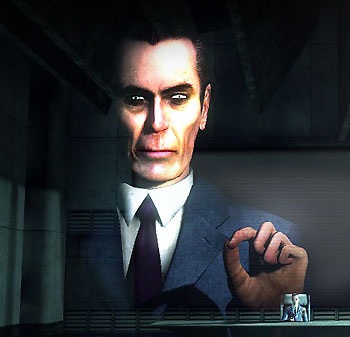 So the rumors boil down to:

1) Half-Life 3 is never coming out, both for the reason you guess but also because of Mass Effect 3.

2) Half-Life 3 may or may not be in development, but if it isn't, it's nothing to do with Mass Effect 3.

So we have two rumors that seem to contradict each other, both supposedly from Valve employees but not through official channels. Obviously the easiest answer is that both rumors are false. Or perhaps one is false and the other true. But after spending my 30's in in an office where a lot of creative work was done, I've realized the horrible truth that both of these rumors could be true. At least, it's possible that they aren't hoaxes.

The company where I worked had three programmers and three artists. Everyone knew everyone else and we all talked on a regular basis, even if we were often working on different things. Yet there were still days where I (a programmer) would go over to the cubicle of my friend Mike (artist) to make conversation and find him working on a project that was completely mysterious to me. The project wasn't secret, but somehow it had passed through the company without me ever hearing about it. Someone had proposed it, ironed out the spec, allocated resources, worked it into the time budget, and begun work on it. Since I wasn't part of the project I wasn't told about it, and somehow I hadn't bumped into it until it was over halfway done. Sometimes the opposite would happen and a project would get canceled and I wouldn't find out until I thought to ask about it weeks later.

That was at a company of less than a dozen people, most of whom worked out of the same small cubicle farm. There weren't any secrets, but there were a lot of cases where you'd get so wrapped up in your own work that you'd be unaware of the stuff going on in the cubicle next to yours.

Imagine how much worse that problem would be in a company with dozens of projects and hundreds of people. It's not like people walk around the Valve offices wearing T-shirts that say, "ASK ME ABOUT THE HALF-LIFE SEQUEL I'M TOTALLY WORKING ON." Unless you go around obsessively asking people what they're working on (which would be really weird) then you probably have a very limited knowledge about what's going on outside of your wheelhouse.

Of course, this only makes these leaks even more frustrating. Even if the journalists are telling the truth that they have an inside source and even if that employee is telling the truth, they might be flat-out wrong for perfectly understandable reasons, particularly regarding big-picture questions about how company resources are being allocated. And even if the information is accurate, it can change by the time it leaks out to the rest of us.

And at the end of it, this is what's the most frustrating thing about it all. The community is compelled to speculate, trolls are tempted to post fake leaks, journalists and critics can get easy clicks (hi there!) by talking about it, and the story is always changing. And even if something true does somehow make it through the morass of guesses and misinformation, we in the audience can't tell the truth from the trolling anyway.

Which gives us another reason to hope for a Half-Life 3 release. Even if you don't care about the game, it would be nice to see this particular circus of anticipation finally come to rest.