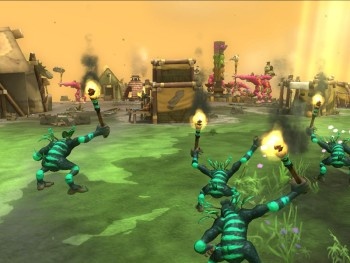 The game we got was indeed shallow and dull. The creature builder was fun, but it didn't have any bearing on the gameplay. It didn't matter how your creature looked. Sure, that's true in an RPG like Mass Effect where giving Commander Shepard a big nose doesn't impact how people react to him in game. But the face builder isn't the focus of Mass Effect. If Mass Effect opened up the face builder every time Shepard gained a level, it would feel sort of strange and pointless. As it stands, Spore is like a version of Sim City where it doesn't matter where you put your buildings in relation to one another.

The mechanics didn't work either. It mostly felt like playing a terrible shallow World of Warcraft knockoff. You just walk up to a creature and fire off the abilities on your hotbar. The world wasn't fun to traverse, the foes weren't fun to fight, and there was no depth to any of it. There was more to the game in later stages, but most of it was like the WoW-clone: Shallow, repetitive, unfulfilling, and completely disconnected from the creative tools that made the game so special.

On top of all this, the science was ludicrous nonsense. Just one example of dozens: To evolve new parts on your lifeform, you have to find bones of dead creatures to unlock the new parts. It's strange and goofy and doesn't even work as an abstraction of evolutionary forces. I don't think people would have minded these sorts of scientific compromises if the game had been interesting or fun to play, but it seemed like since the game couldn't be entertaining, at least it should be educational. It's supposed to be a game about evolution, but if this is about evolution then Call of Duty is about gun safety.

But here is why I bring this up: It's clear there's a good game in here somewhere. Talk to anyone who played the game. You can hear the frustration in their voice. The game wasn't fun, but the idea sounded so exciting and it feels like Maxis was so close to making something great. If you play the game yourself you'll probably go through the same arc everyone else did: An initial burst of excitement and delight in playing with the creature, and then complete boredom and disappointment when you realize none of these systems are connected and none of your creative decisions matter.

I know I'm always going on about how EA is run by suits that don't understand the fundamentals of the business they're in. This is a great illustration of that problem. The public could see the potential. Spore wasn't a horrible game. It was a bold experiment filled with new ideas, and they (Maxis) didn't nail the gameplay on the first try. If you listen to people talk about the game you can hear the same small number of totally fixable complaints come up again and again.

Not every great game is a hit on the first try. Heck, the first version of SimCity was abysmally shallow and repetitive. The expensive prototyping and technology groundwork of Spore was done and paid for. They just needed to iterate on the gameplay. They just needed to take that feedback and make a sequel that delivered on deep(ish) Sim-style gameplay.

But no. Instead they released Dark Spore, a "fast-paced, science fiction action-role-playing game in which the player battles across alien worlds to save the galaxy from the mutated forces of Darkspore". It was multiplayer, action-oriented, and about as far as you can get from what the fans had been asking for. It was a game that completely overlooked the potential of Spore to chase after a completely different and unrelated market.

EA didn't see the potential in Spore because the only thing they understand is sales figures. The game sold poorly? Then it must be a terrible idea and the public doesn't want it. (We certainly wouldn't want to blame the low sales on the ghastly DRM!)

While we can forgive Spore for not getting evolution gameplay right on the first try, it's less forgivable that the EA leadership seems so incapable of adapting to their environment. Unable to learn from their mistakes, discern growing trends, or understand what the public wants, EA is left to chase sales figures in the most primitive, reactionary way.

And that's a shame. Because as boring as I find Spore, I would gladly put my money down if Maxis was allowed to give the idea another try.