Okay, so System Shock is a classic full of great ideas, new mechanics that would become common practice, ambitious storytelling, and a solid villain. So what's the problem? Why is this game not something you can recommend to the next generation like Ocarina of Time, Doom, or Super Mario? 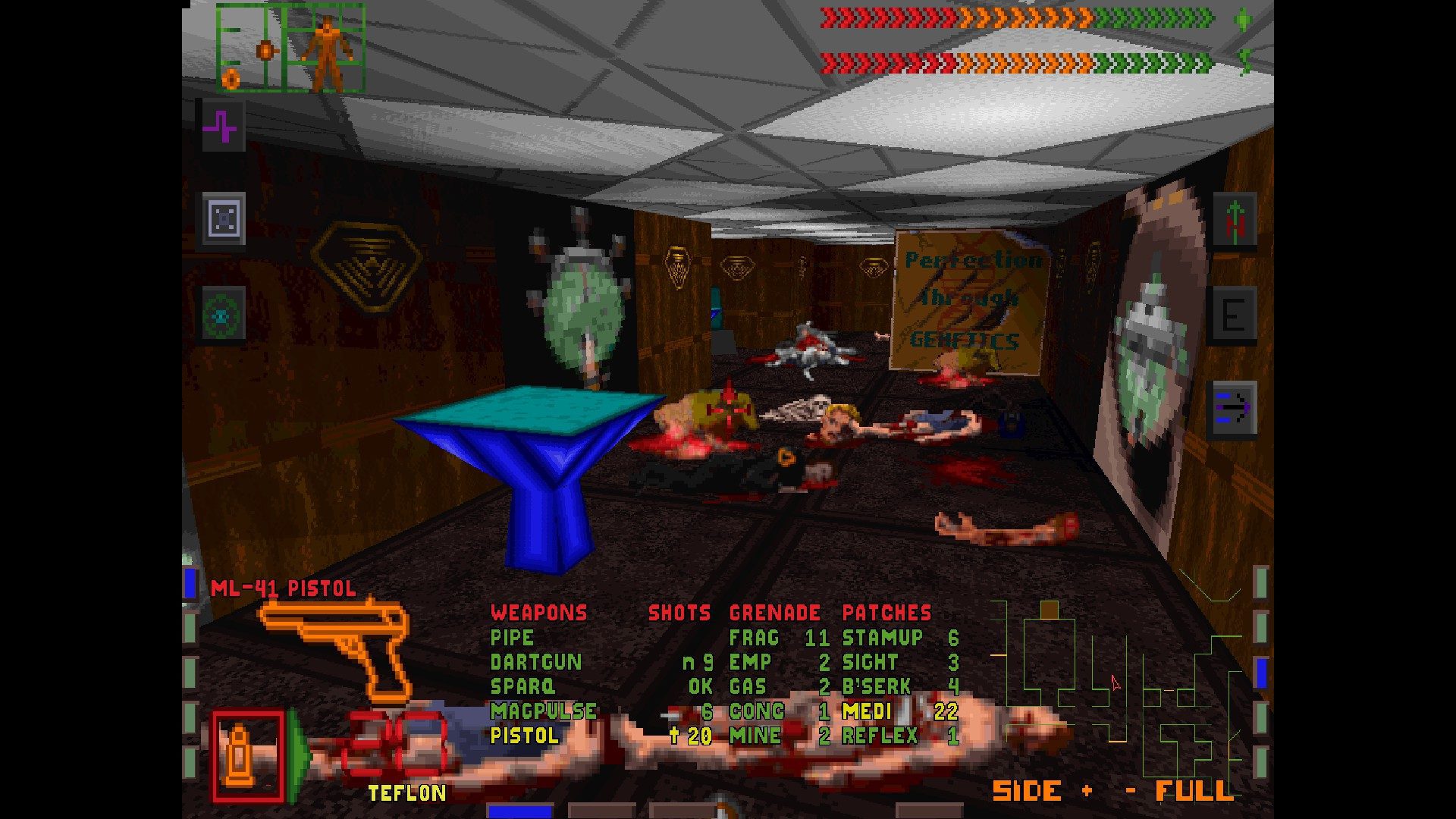 It's the interface. It's horrible. You can overlook dated graphics, low-bitrate sound, emulation hassles, and cheesy cutscenes, but there's no getting around terrible game feel.

You move with the keyboard, and aim your weapon at things using a mouse cursor. In 1994 this made sense as one possible way that the emerging world of first-person gaming might evolve, but after playing for two minutes you'll see why this idea went extinct. Holding down the "D" key so you can sloooooowly pivot in place and click on the monster that's biting you in the butt is comical in its awkwardness.

By default, your view takes up less than half the screen. Along the bottom are windows for weapons, your map, and your inventory. The left and right edges of the screen are given over to buttons for your cybernetic powers. Your health bar at the top is massive, taking the entire width of the screen and nearly a seventh of its height. There are options to make these elements see-through, but it still feels like walking around with a Microsoft Excel spreadsheet superimposed on your vision.

The player character is a complex thing to control. "Piloting" is the word that comes to mind. You can lean, crouch, crawl, climb, jump run, and (if you get the right upgrade) skate around the gameworld. Add in the buttons needed to manipulate all your various implants, plus the weapon controls, and you've got a game that uses about half of the standard keyboard.

The game asks a lot of you. There aren't any waypoint markers, and your goals aren't always clearly spelled out. In places it's sort of adventure-game-ish in the way it expects you to collect items and solve problems with them without much coaching. It usually doesn't gate your progress, so you might accidentally stray into a dangerous area before you've collected the weapons and tools you need to keep up with the enemy. It's hard and long and you have to find your own way through.

It's not a horrible game, and I'm not trying to talk people out of playing it. In fact, I'd love if there were more people out there who were familiar with this historic oddity and supportive of shooters with this level of complexity. I'd just hate to see a new generation rush in after hearing the hype and then wondering what all the fuss was about.

We can argue about what is the "Citizen Kane" of gaming, but I'd call System Shock the Metropolis of gaming: It's famous and innovative, but not many people have actually watched it, and the things it did right were mostly done better by later efforts.

But as people are so fond of pointing out: Games Are Not Movies. It's a lot easier to sit through an old movie that to work your way through an old game. But sometimes it's good to do it anyway, just to understand how the hobby evolved. By all means, give System Shock a look. Just be ready for the goofy controls, obtuse missions, audio log-based storytelling, and odd interface. There's a good game in there if you're willing to work for it.