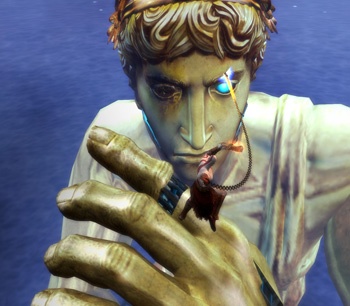 Consider that if a player can hit a quick time button with 98% accuracy, he has an 85% chance of beating an eight-event sequence. (0.988 = 0.85) But if another player is just a little slower and can only hit the buttons 88% of the time, then he's only got a 35% chance of success. (0.888 = 0.35) A slight difference in skill becomes a massive disparity of outcomes. This is great if you're trying make one of those games the really separates the proverbial men from the boys when it comes to gaming skill. Mister "35% chance of success" is going to be very frustrated and want to quit if there are a lot of chained quick time events in your game. (This is particularly true if each attempt means he has to listen to the same Resident Evil 4 dialog repeated over and over again.) But this is terrible and self-defeating game design if you're trying to make a game to appeal to a large and diverse audience.

But even if you are making a game for the ultra-competitive chest-beating alpha males of the gaming community, quick time events are still a horrible way to go about it because nobody cares if you're good at them. Lots of people are bad at parallel parking, but no matter how awesome a parking job you do, people aren't going to line up on the sidewalk to give you high-fives afterward. Big deal. It's just a stupid, routine task. It's either frustratingly difficult or an easily overcome nuisance. Neither of these leads to all-important sensation of having fun.

This frustration is exacerbated by the fact that the QTE is usually associated with a pre-set action sequence. The player would love to watch all the spectacular fireworks going on, but they have to keep their eyes glued to one section of the screen in anticipation of the next random button prompt. When the sequence is over they focus back on the action and realize that whatever they missed must have been pretty exciting, and that they weren't a part of it because they were playing Simon Says at the time.

Some games are better about this than others. God of War did a good job of placing the prompts in areas where you were likely already looking, and it prompted you to hit buttons that had some loose association with what your avatar was going to do. This creates the (false) impression this is something you are choosing to do, as opposed to something you're being told to do. This makes it feel like you took part in the action instead of coaxing the game into letting you see the action. It's an important distinction, and one that seems lost on most game designers. Likewise, Fable 2 did a decent job of testing reflexes in a way that allows the player to cultivate skill which is portable from one platform to the next. But these games are exceptions. The trend seems to be for random buttons to flash in random areas of the screen, to pull the player out of the game so he can perform an abstract chore while the game designer has all the fun.

I don't expect quick time events to go away anytime soon. It's a crutch, but it's a popular one that saves time and money for developers. But if they could stop taking this bad idea and making it worse I'd call it a step in the right direction.

And someone really needs to make that ninja chef thing. Preferably not Capcom.

Shamus Young is the author of Twenty Sided, the vandal behind Stolen Pixels, and is rubbish at quick time events.