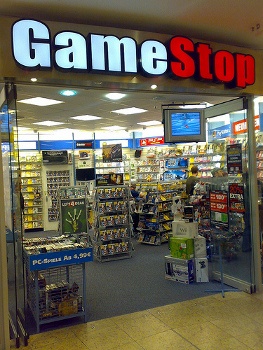 Case in point: Modern Warfare 2 is one of the most popular videogames in history. It sold really well. I'm not really interested in it, though. Not my thing. But if I saw it on the shelf for $10 I might let it fall into my cart just to see what the fuss was about. What the heck, right? It's ten bucks. But the game is ten months old and is still retailing for five times that. In that same span of time, the movie Avatar went from theater blockbuster to weekend rental. In another year, Avatar might appear somewhere on premium cable for "free" and end up in the DVD bargain bin for $9. And a year from now, new copies of Modern Warfare 2 will still be fifty bucks. I think everyone who thinks MW2 is worth that much has bought it already. But the publishers would rather leave it there than work their way down and go after the secondary markets of lower-interest players. The game will never reach $10. Think about that. Publishers would rather make nothing than let me have it for $10 a few years after release.

And this refusal to lower prices is what is creating this space in which GameStop is able to operate. If games came down in price at a steady pace, it would squeeze the used market instead of gamers. GameStop would need to pay less for used games with the understanding that the new versions will keep getting cheaper. And this would entice a lot of gamers to just hang onto their old games instead of trading them in.

Note the massive success of the casual games market, despite the highly variable quality levels of those sorts of titles. People are willing to take a risk on a $10 or $20 game but get very, very picky with their money when you start asking for $60. I'm not a mathematician, but as far as I can tell, it's a lot better to sell half a dozen new copies of a game for $20 than to have one $60 copy of the game sit on the shelf forever. I don't know. Seems that way to me. Maybe I'm using Microsoft calculator wrong?

Gamers who buy used aren't "cheating" you. They just don't want to pay that much. There is no reason to not do business with these people once you've made your money from the core fans.

Or you can just keep whining for gamers to pay extra in a bad economy when a cheaper alternative is readily available, while at the same time haranguing them with DRM and micro-transactions. I'm sure you can re-shape the long-understood consumer behavior of the average human being if you can just make them feel guilty enough.