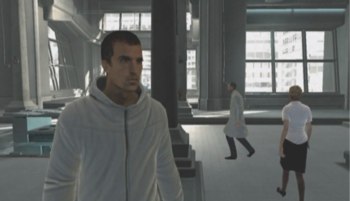 The Templars believe in keeping everyone oppressed under the heel of tyranny and the Assassins believe in setting everyone free to do whatever they like. Or at least, that's how the Assassin's marketing department swings it. The Templar's marketing department, meanwhile, prefer to word it thus: the Templars believe in peace and security throughout the world, while the Assassins are all terrorists who just want to tear down the system and leave everything in chaos and horror. The thing is, though, neither marketing department is exaggerating. Both sides are wilfully blind to the inherent flaws of their preferred system. The Assassins are supposed to be the good guys so occasionally they get introspective and brood over the righteousness of their cause, but then they run out and stab a whole bunch of people to death in pursuit of this cause they're not entirely sure about.

There's even a bit of dialogue in AC3 where Connor mentions being asked what the Assassins Order are going to do after they "win", and not being entirely sure how to answer. You don't know? This order has existed for thousands of fucking years and you don't know? No-one's ever sat down and worked this out? Somewhere in some secret Assassin temple behind a labyrinth of sophisticated traps there's a manifesto engraved in stone reading "SEARCH ME, JUST WING IT"? Well, let me fill in this little blank for you, Connor. What will happen is that you will set everyone free and yell "Do whatever you like!" and then five seconds later someone will commit a crime. And then you will have to do something to punish the guy who committed a crime, and eventually will have to create some kind of organized force to dole out punishment to people who committed crimes and then - oh no! This isn't glorious anarchy, is it, this is back to being boring old order again. Maybe there was room to negotiate with the Templars after all.

History has shown that tyranny doesn't work out in the long run. But it has also shown that what equally doesn't work are political systems based around the assumption that human beings won't act like selfish dickheads. The ideal situation is for neither the Assassins nor the Templars to be in control, but constantly struggling and yanking each other back the moment any footing is gained. I think I've figured out where this series has to go from here. There's a third secret society that has also existed for millennia whose job is to keep things in the middle. They help out the Assassins when the Templars are in control and help out the Templars when the Assassins are in control (generally the period immediately after an Assassin's Creed game). We could call them Team Sensible. Sensible Creed. Hit me up, Ubisoft, I'll write you a treatment.