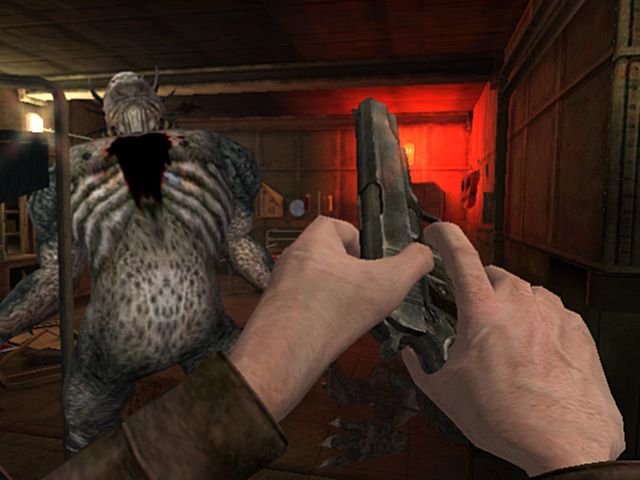 Suspension of disbelief has a slightly different meaning with regards to videogames. In your standard story it means accepting that for, the sake of keeping the story interesting, certain things will go unexplained. For videogames, it means we accept a few lurching differences to how things work in reality as long as it keeps the game entertaining. As long as it's fun, flowing and functional. The three F's. Six F's if you precede each one with "fucking". Obviously our character isn't going to have to spend weeks in traction to get his health back, because that's not fun. He or she is just going to squat in the corner, eat some bandages, poo out some blood and get back into the fray.

You're no doubt thinking - at least I hope so - that this is all very obvious. But what I've noticed in my experience with people pitching new game concepts is that everyone's got at least one big idea for a game mechanic that will add realism. I've had a few in my time. Like when I said that shooters should replace the health bar with a luck bar, so that bullets that would have hit miss by an inch until the luck bar runs out, the protagonist finally gets shot and the adventure ends. But in practice that would be detrimental to gameplay, because the thud of a bullet hitting flesh, a splatter of blood and the character saying 'ow' all convey much more efficiently the fact that the player is doing something wrong, and needs to stop doing it or they're going to get shot some more.

And sometimes these ideas for added realism in gameplay get as far as the finished product. I'm thinking of the health system in Call of Cthulhu: Dark Corners of the Earth. In which your body is divided into sections and there are various different kinds of injuries each section can undergo, each of which requires different medical supplies to fix. Yes, more realistic, disregarding the fact that injuries heal instantly, but it doesn't add shit as a gameplay mechanic. You refill all the different kinds of medicine simultaneously whenever you pick up a first aid kit, and there's a hotkey that automatically fixes whatever needs to be fixed in the same awkwardly long healing animation as always. So in the end it was all a waste. They might as well have had the main character heal by injecting fairy dust into his eyeball and used the effort to make everything after the Innsmouth chase sequence not crap.

When designing a game, the decision that comes up over and over again is whether to favor realism or gameplay, and if you've got sense, you'll go for gameplay every time. Which is not to say realism doesn't have its place. Realism adds weight, it adds immersion, a shooter wouldn't have the same impact if everyone bled glitter glue instead of blood, but beyond that it is the awkward twat at a social gathering who doesn't say anything except to flatly say that they're offended every time someone tells a racy joke.

I don't want to seem like I'm getting all up in webcomics' faces for going for the easy laughs, because glass houses and all that, but if you ever find yourself about to seriously complain about a gameplay mechanic because it's not realistic (or indeed praise one just because it is) then maybe have a think. Would the game still be entertaining if this issue was fixed? Is a car with a hosepipe attached to the exhaust a good place to take a little nap?