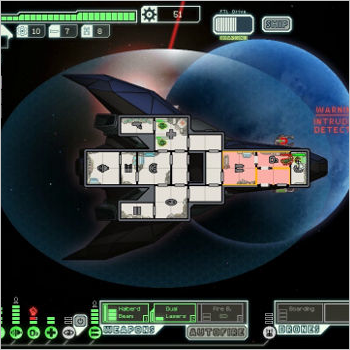 Now, at time of writing, there's another reason that FTL's on my mind: I finally defeated the sodding final boss last night, just before I went to bed. For fellow space travellers, it was the Glaive Beam that clinched it, 'cause that shit is like a swing from the Grim Reaper's scythe. Combined with two attack drones and a five-shot laser cannon to take down the enemy shields, it can do as much as 12 hull damage in one shot. And a fully upgraded cloaking device was a very handy defense against those very fucking mean-spirited ultimate attacks the second and third forms have. Frankly, I tore shit up so fast it probably highlights a severe balance issue.

If you're not familiar with FTL I do recommend trying it on Steam. Obviously I find it absorbing if I've played it enough to finally beat that big smug twat at the end (only on easy mode, mind, because I'm only absorbed, I'm not fucking nuts). It's a rather effective mix of exploration and Sword of Damocles-style tension. You can explore the galaxy righting wrongs and upgrading your ship but if you ever stop moving in a continuous easterly direction then you will be fucking murdered by the encroaching rebel fleet. Incidentally it is nice to see a sci-fi story where our sympathies don't automatically lie with the rebels. Smashing the state doesn't always help, guys. You never hear about all those people who were on Empire unemployment benefits before the Death Star was blown up, do you?

Ultimately, though, success in FTL depends entirely on randomness, which is one of the common issues raised. There's a random encounter at virtually every stop, many of which require you to make a decision, and it's entirely random whether a choice ends with a benefit or fucking you over. After a while I noticed that I was pretty much skim-reading all the text explaining the situation because it hardly seems to matter, and this is coming from a man who always insists on reading aloud the flavor text while playing Arkham Horror, preferably with a flashlight under my chin.

The thing about randomness in core gameplay mechanics is that at this point we are essentially gambling. You can have the finest tactical mind on Earth who knows to fire a beam weapon across six different rooms in the split second after the last shield goes down, but if pernicious fortune never provides the opportunity to get a beam, then you're stuck flicking ion pulses at a four-shield monster. I've always had a problem with any game mechanic the player is powerless to influence. Even just the addition of a "luck" stat that can be influenced with upgrades or pickups would at least give a slight edge on which an informed decision can be made.

I had a similar problem with XCOM along these lines, but in that case I was being asked to make a much bigger investment. Playing through the campaign and gradually building up your capability is a far longer operation and being buggered around by UFOs randomly appearing or not appearing can sink a much greater amount of work, while a game of FTL might last about an hour. Randomness I can tolerate better in the shorter Roguelike style of game, because embarking on another doomed voyage is like blankly pulling on the fruit machine lever one more time. A fruit machine whose cylinders will spin for about an hour, but at least it has some lovely pictures of space to look at.