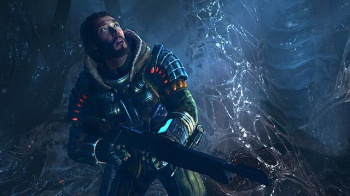 Between missions Lost Planet 3 makes you go back to a home base full of quirky characters no-one gives a shit about, plodding down a lengthy entrance tunnel, parallel parking in the giant robot garage, taking a number of elevator rides and map transitions to finish all your shopping and mission-handing-in duties, before you can get back in the robot and trudge all the way back down the entrance tunnel to wherever you need to be next. The robot suit you are forced to use is slow, ungainly, and half the time the quickest way to get around is to get out and push it along with a stick.

Metroid Prime is a rich odyssey of visual design. Among the many locations you visit are such disparate environments as desert temples, thick jungles, fiery caverns, snowy mountain bases, and underwater wrecks. Each one uses a new palette of colours, and is packed with memorable landmarks that make it easy to quickly differentiate rooms, assisting with mental navigation. There is a huge variety of different gameplay challenges, including platforming, puzzles, and combat, each environment having a different range of foes to test your mettle.

Lost Planet 3 also takes place in a disparate collection of environments, ranging from snowy mountain areas, through mountainous snowy areas, and some bits in vaguely industrial buildings that happen to be located in snowy mountain areas. The monsters consist of every possible iteration of slimy grey things with orange bits, and the gameplay largely consists of shooting them. Between shooting things you also have to stand next to things with big arrows over them and press the button it tells you to press.

Metroid Prime is a great example of using story and dialogue with subtlety and elegance. While the main character never speaks, and no characters speak coherently to her, a sense of narrative is constantly created from everything around us. The score creates an atmospheric bleakness, conveying the sense of being totally alone on a hostile world. The only writing can be found in emotionless reports and pieces of lore written by absent authors to be read at your leisure, so context is created without lengthy interruption.

As you walk around the hub station in Lost Planet 3, random passers-by throw lines at you like the townsfolk throw rotten tomatoes at criminals being pilloried through the streets. The dialogue is not so much a delightful peppering upon your meal as a kind of stinking thick fog you have to push your way through to get anywhere. Any actual quality to the writing and characterisation is lost behind absurd comedy accents and recording quality that scrapes against my aural nerves like someone attempting to comb an inchworm.

While later 3D Metroid games would suffer somewhat from depicting Samus Aran as a yellow-haired big-titted stripper grabbing every opporunity to ditch the armour in favour of a thin layer of blue latex paint, in Metroid Prime her silence and solitude create a picture of strength and indomitability, and if you end up getting the ending where she takes her helmet off, she looks controversially like an actual human being with a sensible haircut.

In Lost Planet 3, you have a beard. I'm still working on this one.