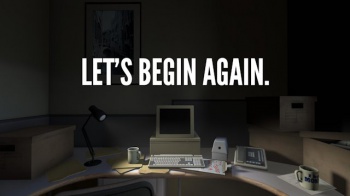 Actually, B:TS is pretty bad at the whole branching narrative thing, too, because several aspects of the plot seem to be utterly predetermined regardless of your efforts. The character of the hunky CIA colleague, for example, seems to default to being the primary love interest no matter how abominably you treat him (and you should treat him very abominably because he's a complete git.)

One of the main things Stanley Parable has over B:TS is that it is self-aware. It's almost a deconstruction of barely-interactive storytelling. You are a silent protagonist and your actions are narrated by a calm, academic-sounding voice just before you make them, and the branching comes when the player chooses between obedience or disobedience. Of course, disobedience is just obedience of another kind. It's still following a linear narrative, just one in which the narrator becomes increasingly exasperated with your actions. In doing that, the story shifts from you, Stanley, being a hapless character trapped by the whims of an omnipotent being, to Stanley and the narrator both being hapless characters trapped by each other.

It reminds me appealingly of Rosencrantz And Guildenstern Are Dead: a sort of exploration of characters becoming aware of being trapped inside a story but unable to do anything to escape it. It's filled with amusing little touches you can only find by making the effort to struggle against participating in either the obedience or the disobedience paths. Through some less-than-obvious physics manipulation you can jump out of a window, only to be called out for expecting to find something, for example. My personal favourite, though, is to duck into a broom closet mid-way through the obedience path and refuse to leave, prompting the narrator to eventually conclude that you must have died.

Most of all what makes TSP a more interesting story experience than B:TS is that TSP has fluid characters. Stanley is a blank cypher whose personality is interpreted entirely from the choices we make, whereas the narrator's personality changes significantly depending on how much control we permit him to have over the situation. Beyond: Two Souls, on the other hand, seems to have a pretty good idea from the outset what it wants its characters to be, and could give two shits for any contribution you want to make. The story hopping back and forth through time creates a sense of disconnection between events, and any development characters undergo throughout a chapter is reset at the start of the next.