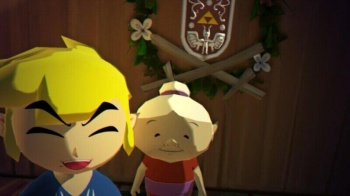 I don't find that compelling. It's one of the reasons I dislike the latter Fable games where 'heroism' is a quality unique to a specific bloodline of handsome white people, 'cos it adds this GATTACA-style genetic discrimination subtext to the plot. Where's the drama in someone who has been magically destined to be a hero and save the world, being a hero and saving the world? Far more interesting when someone from common stock has to overcome something and realize their potential.

That's why I like Wind Waker Link, because he's just some putz. On the game's outset, when he's still on not-particularly-cleverly-named Outset Island, he takes the role of hero by default because he's the guy who happens to be wearing the right clothes at the time when a hero is called for. He embarks on the world-saving adventure initially for self-interested reasons, to rescue his kidnapped sister, and he's only ever acknowledged as a hero by other characters when they seem to be humoring him. It may be implied here and there that he is the latest reincarnation of the destined hero, but it's not the only thing driving his motivation and character. One could imagine that the Gods and sages and other bullshit entities are all declaring him the hero partly to convince themselves.

What I think would make for an interesting Zelda game would be a plot in which Link is once again appointed by destiny to be the hero, but makes every attempt to resist it. Because he's a pragmatic and realistic kind of bloke who would prefer to look after his own affairs and let the kingdom sort itself out. A man continually baffled by the way neighbors and complete strangers alike continually ask him for favors they would have no reason to think he would be qualified to carry out. And who doesn't particularly like the princess much because she seems to have a rather generic personality.

Sooner or later the Gods of Destiny or whoever would get ticked off and burn his farm down to get him going on the Hero's Journey. But that would make him only more determined to stay, because now there's all kinds of work to be done to get the farm back on its feet. Finally, in exasperation, he's magically dressed in full hero gear and transported to a field where an equally perplexed Ganondorf is waiting.

Only they don't fight, but instead talk, and realize that their problems are not each other, but whoever this God person is who keeps destining them to fight, generation after bloody generation. Together they fight their way through the mystical outlying territories, where they find the final answer to the Zelda conundrum: an empty throne. For there was no God behind this, no grand controlling intelligence: just the eternal, unstoppable force of the status quo. And with that realization, everyone starts dancing to Rockin' All Over The World as the credits roll.