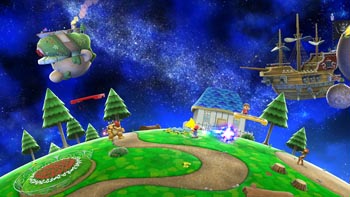 Nintendo were doing the good nostalgia thing right up to Mario Galaxy, as I keep saying, 'cos that was the last game that took one of their beloved properties and elevated it while still keeping its core principles intact. It was the culmination of all the lessons learned from all the Marios up to then (although "ditch the fucking lives system already, that shit's annoying" remained the elusive lesson). Since then, though, it's been pretty much solid bad nostalgia all the way, hasn't it. Everything's a step backwards, now. To the point that Nintendo has officially regressed back to making SNES games.

I refuse to accept any notion that Link Between Worlds represents any kind of forward movement from something like, say, Wind Waker. Or even Ocarina of Time, to be more 3DS-relevant. Those were good nostalgia games that took the Zelda model and elevated it into a stirring adventure across the lands, with pleasing graphics, spectacular views and sweeping, epic music. Going back to squeaky top-down grid gameplay is the exact opposite of an elevation. It's like Might and Magic X going back to grid-based movement, not because they genuinely think it's better than free organic movement (unless they do, in which case they're cretins), but to milk a momentary nostalgic feeling in passing 30-year-olds. It's like going back to playing the Game of Thrones board game as a substitute for watching the TV show.

Oh, but there is something new. Instead of a properly crafted, paced experience with a natural difficulty curve in which the game world gradually unlocks as you collect tools allowing access to more areas and powerups, Link Between Worlds just dumps them all on you at the start. You rent them out from a shop for 50 of the local quid, and if you die, they go back and you have to rent them again for another 50. Alternatively you can buy them outright for a much larger price.

Innovative, sure, but two things: firstly, this doesn't in itself turn the bad nostalgia into good nostalgia, it's just bad nostalgia with one new idea in it. And secondly, I wonder if it's entirely coincidental that as well as being innovative, this gameplay model is also a hell of a lot easier to implement than something like the aforesaid properly paced experience.

You don't need items A, B and C or to explore such and such a place to get the next tool, all you need is money. And since you lose them when you die, and have to rent them again, the loss of money is one of the few things the game has to threaten you with. But you can avoid this particular trauma by making an even larger money investment. What this has done, reader, is make the game less about adventure and exploration and saving the princess, and more about money. Making lots of money to hoard and spend on things. Oh, Nintendo. Are you wearing your heart on your sleeve again?