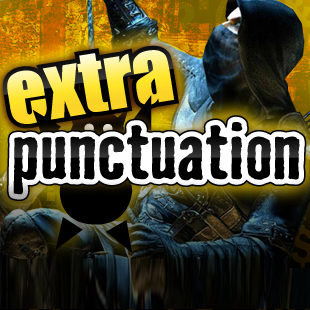 You know why it's called an 'overworld', right? 'Cos whenever a game has one, I say 'OH FOR FUCK'S SAKE'. Except I slur it a bit so the F sounds like a V and I stop just before the 'fuck' and say 'world' instead, because of self-censoring. Sorry, that was a little tortured, wasn't it. And speaking of things that were tortured, Thief. Man, this was the best paragraph ever. Almost seems a shame to have to move to the next one.

The game made me want to talk about overworlds, because it has one, and a rather boring one at that, while my favorite game in the series - Thief 2, if I haven't made that abundantly clear - does not, just missions and briefings in between. Now, on the surface, the overworld seems like a noble pursuit. It could create a sense of connectivity between the various gameplay sections, offer the player choice and freedom in movement, and allow for plenty of opportunities for world-building. That's the best case scenario. They very often just get boring.

There's a difference between an 'overworld', and a 'sandbox'. In a sandbox, you can go wherever you want, and the stuff you can get up to in the sandbox is the actual meat of the intended game experience. The mere act of getting around a sandbox is fun and you can make your own entertainment, usually by running people over or throwing them into the sun. The missions are little more than a system for forwarding the plot, tutorializing mechanics, and having the odd fancy boss fight, and mostly take place in pre-existing parts of the sandbox. Skyrim, GTA, Prototype, these are sandbox games. I'm glad you're coming with me on this.

The 'overworld' almost takes the exact opposite route. You can't usually go absolutely anywhere, it's restricted to a handful of important locations connected by linear paths. In such games, the missions are the meat of the experience, and usually have areas to themselves, not taking place in the connecting world. Although the missions are still where the plot and tutorials and fancy boss fights happen. So, on reflection, you might wonder why there has to be a connecting world at all, and now we encroach upon the point of this article. There are good games with overworlds - Deus Ex and Mass Effect for example - where the overworlds exist as a sort of breather space for world building, trade and quest exchanges, and where new adventure and happenstance can strike you at any time as you navigate its hallways. In games like Thief, more often than not the overworld is just a commute.