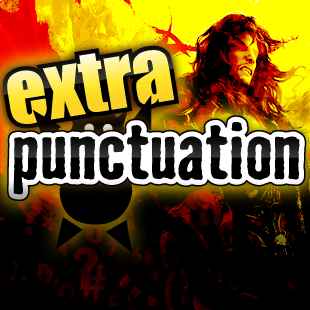 The problem with Castlevania Lords of Shadow 2 is a traditional one for over-bloated triple-A development, and that's a lack of focus. Maybe if they'd stuck to one idea they could have made that one idea really good. Instead we get forced stealth sections, a dual-world mechanic in which nothing that happens in one world affects the other in any way, and characters popping up and popping out again like it's the fucking Academy Awards.

Which is a shame, because I like Castlevania. Well. I like Symphony of the Night, the rest of it I can take or leave, but I do like that game a lot. I'm quite fond of how Dracula is depicted as more a force of nature than an individual, who carries around with him this ineffable blur in reality around which his castle and armies of darkness are formed. An inconceivably vast abyss that has grown from the darkness inside a man. And the original man is occasionally glimpsed in his flights of mopey melodrama.

Mopey melodrama was about as far as the Dracula in Lords of Shadow 2 got. He played too much like Kratos from God of War, or himself from when he was human in the previous game - all permanently angry and scurrying about worrying at the hides of big monsters with overly energetic attacks. That's not Dracula, that's putting way too much obvious effort in to be Dracula. This is supposed to be one of the most powerful evil beings in the world, he should be able to defeat most foes by casually wiping a bogey off on their sleeve. Alucard in Symphony of the Night played much more like what you'd expect from a Castlevania vampire - all gliding along the floor and managing to have a cool pose for every situation. The way he'd open his cloak and launch fireballs like it weren't no thing. He even got hurt stylishly - throwing himself backwards with one hand to his forehead, until the monsters start wanting to throw their weapons down and insist that he take this seriously.

So I said Lords of Shadow 2 should have focused on one idea, and that one idea should have been Dracula waking up in a modern-day city that has forgotten him. Because that's an idea that's going places. It's an exciting twist that could never be accused of just knocking the same shit out as always. In theory. It's one of the few ways a game in which you play as Dracula can work. If you set it in Dracula's castle, there's no adversity there, that's his seat of power. You have to come up with some seriously contrived bullshit to explain why all his monsters are attacking him all of a sudden.

But throw him into an unfamiliar setting, far from his source of power, outside his comfort zone, and just woken up so he's really wobbly, that idea has got it all. From a position of ultimate power, Dracula is now just a sad, lonely man who gets too many late nights. That's how you make a sympathetic character out of someone who is at heart a cosmic-level bastard.