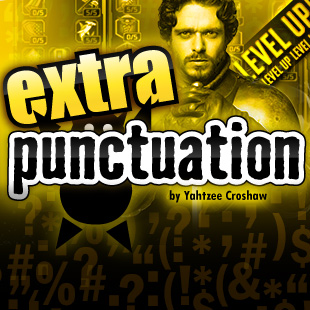 I'm going to employ my mystical powers of clairvoyance, now. With no pre-existing knowledge, I am prepared to swear that someone, somewhere has proposed or is developing the idea of a Game of Thrones MMO. I will now Google this and see if I was right. (alt-tab typey type alt-tab) Oh, what do you know?

Pattern recognition is a useful skill in the art of video game industry clairvoyance, and this particular pattern is a fairly easy one to spot. The more popular a franchise gets, the more characters it establishes and the more the larger fictional world of the franchise is realised, then the probability of someone starting work on an MMO based on it approaches one. Whether or not the MMO is ever actually finished or released is a more complex matter left to the capricious hands of fate.

But if you're the creator or anyone with any kind of investment in a large or ongoing work of fiction, I think that an MMO is the very last thing you want. I've made the point before that multiplayer is almost completely incompatible with linear storytelling on a fundamental level. Other human players are too much of a distraction, whether you're concentrating on hunting them down in Titanfall while completely ignoring the dialogue, or watching them hilariously teabag the things you're supposed to be frightened of in Dead Space 3. One of the few exceptions is (all together now) Dark Souls, where other players are more of an occupational hazard than a constant distraction. And in that case it's all carefully worked into the story to intentionally create the feeling of being stuck in a world that's coming apart at the seams to the point that it's under constant threat of invasion by dickheads from beyond time and space.

But an MMO in particular is a cruel thing to subject an intellectual property to. For one thing, it hardly seems to matter what kind of wallpaper you paste onto an MMO, sooner or later all MMO experiences are reduced to going to a place indicated on the map, touching the things you find there, and enacting endlessly repeating combat sequences until you get carpal tunnel syndrome.

Secondly, all MMOs take place in a frozen moment of time, where the status quo can never change, for the sake of all the other human players who are going to want to come along and do the same quests as you. You leave what might have once been an ever-changing political landscape of intrigues and frequent struggles (as with Warcraft pre-WoW) in a state of permanent "and things basically went on like that". Barring the odd expansion like WoW: Cataclysm that changes things up in a not-particularly-changing-things kind of way. And you can't have that with Game of Thrones in particular, because Game of Thrones is characterized by all its characters being in a constant state of movement and fluctuating allegiances, with twists and deaths constantly changing the game (of thrones) every time things have been too quiet for too long. And however it might claim that, no really, significant things are totally happening you guys, sooner or later an MMO has to have characters A, B and C permanently in locations X, Y and Z or it can't operate.