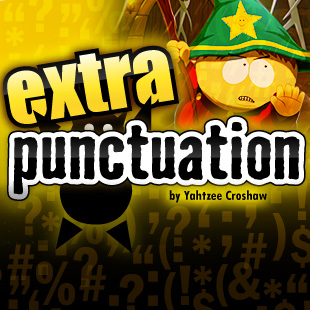 So I was all settling down to write something about adaptations, but then I started to wonder if you could really classify South Park: The Stick Of Truth as an adaptation. I mean yes, in the strictest sense of the word, it's the television show adapted into a video game, but I've come to associate the phrase "video game adaptation" more with terms like "tie-in" and "spin-off", which connote a game made for little more reason than to remind you of the source, usually not doing much more than pasting characters and designs from the original material onto a proven but bland gameplay concept.

Essentially, the word "adaptation" implies, in my mind, something being crafted to resemble something that was made by somebody else. Whereas Stick Of Truth was, for all intents and purposes, created by the original creators of South Park, and feels far more like a continuation of the show than something that spun off from it. Which is cheering. It shows that video games are becoming more accepted as something that can be a part of the wider, canon-establishing, more mainstream forms of popular media, rather than something that merely hangs off it, like branded lunchboxes and Saturday morning cartoon shows.

It did lead me to the old question of what the formula is for a good video game adaptation of a non-video game IP. Because if someone could come up with a straightforward set of directions to follow, which would always result in a great game that enriches the original, then that person could become very rich indeed.

Back in the day, maybe like in the late 90's and early 2000's, the formula seemed obvious to me. Video game adaptation never worked if all it did was attempt to follow the plot of the original film (or TV show or whatever). If you wanted to see that story you'd just watch the film, not some clunky and awkward version of it that keeps trying to crowbar in boss fights. The tie-in games I'd played and enjoyed seemed to do well by using the existing universe as a jumping-off point to tell a new story, a la Star Trek Voyager: Elite Force.

Over time, though, too many exceptions to this rule have come up. I've played plenty of adaptations that try to tell a fresh story in an existing universe and produce absolute garbage (such as, say, Force Unleashed 2, or most MMO adaptations), and I've played one or two that (loosely) follow the plot of the source material and do pretty well out of it (Spider-Man 2 The Movie The Game, not to be confused with Amazing Spider-Man 2 The Movie The Game, Christ this is going to get confusing now).

Perhaps, taking the example of South Park, we can create a new formula: that the adaptation works if the original creators actually take an interest and get involved, not just delegating the task to a jobbing dev team without the vision. But then again, Ghostbusters: The Game. The fact is, big-name creators aren't necessarily going to have an advantage in game creation, because different skills are involved. Stick Of Truth worked out because the South Park guys seem to have some genuine interest in and understanding of video games, judging by those episodes of the show they did that spoofed WoW, Guitar Hero and Pokemon.