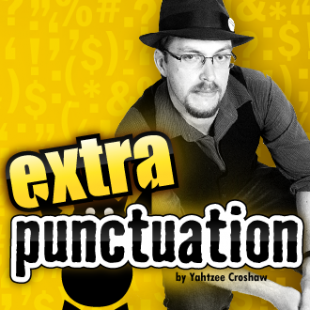 So, it's E3 week at the Escapist (as well as generally, in the world). And as always, my schedule means Zero Punctuation cannot possibly be made expediently enough to be able to comment on it while it's going on. My column, on the other hand, is a different story. So rather than wait for after the inevitable ZP attempt at counter-hype to Extra Punctuation E3's balls off, we thought this might be the smarter route.

Of course, having said that, I'm writing this before E3 actually starts, so I can't really comment on anything specific. Instead, I will make some predictions for the major upcoming press events, which, by the time this column goes up, will already have happened, barring disaster. So you'll already know if I'm right, you lucky sod.

First of all, I'm not holding out hope for any mind-shattering announcements, 'cos we're only one year into a new console generation and everyone blew their loads last year. So I'm expecting a lot of reminders of upcoming exclusives mentioned last time. Gameplay demonstrations I will give a lowball estimate of averaging 20 separate moments that make you sorely want to punch the demonstrator in the throat. If anything hardware-shaped comes up, I hope it relates to VR and Oculus tech, 'cos I've been waiting for shit like that since back when I watched Knightmare.

Microsoft: Considering last year's farce when they started chucking features out before they'd finished announcing them, I give even odds whether they spend their whole time this year humbly wringing their hands or just going for broke with one hundred percent starry-eyed back-slapping self-denial. Probably the latter, 'cos that's the theme of the whole fucking event, isn't it?

Sony: More self-back-slapping, but with more of a tangible sense of insufferable smugness now the Pisspoor's been pushing in the Bone's shit since day one. And maybe they'll finally update us on The Last Guardian. Or will they? Might be risky, 'cos that game's long wandered into the John Romero Exasperation Zone (though not quite as far as the George Broussard No Man's Land).

Nintendo: Not presenting for the second year running. Whatever game is being played in the triple-A industry these days, it seems Nintendo would rather be playing a different one, with comprehensible rules where everyone can just sit in a big circle and join hands and be friends and nobody has to be kicked in anything.

In all seriousness, I think the industry's got it completely wrong with E3. Triple-A games have every advantage in the sodding world. They're going to be all over website ads, Youtube ads, and the sides of buses in major cities. With all of that, it seems mad that we spend the lion's share of the industry's major media event giving them even more sodding coverage.

E3 is our Academy Awards - a big pleased-with-itself happy-clappy back-slappy circle jerk for the richest motherfuckers in the game. Seas of desperate fixed grins trying to convince each other that their increasingly ridiculous costs aren't crumbling the ivory tower. And it's not a bad thing to have, it's nice to know that all of these people are going to be in one place if we ever need to plan a carpet bombing. But what we also need, as well as that, is something like a Cannes Film Festival. Something based around the competition for the Palme D'Or or equivalent, judged by people with as little bias as possible. You make it a little more cut-throat, and a little less about game publishers and game media climbing into a nice foamy bath together to give each other back-rubs while sensually moistening their lips.

Actually, it couldn't be exactly like Cannes, 'cos Cannes is based around bringing exposure to film from around the world, and video games are already pretty effectively globalised. Instead, it would need to concentrate on exposing games from every gameplay genre and level of funding. And instead of the jury being one person from each country, you'd have one role player, one MOBA pro, one old dear on the end who just likes Bejewelled, etc.

But I digress. E3 is what we're stuck with and we still have to stomach it for the rest of this week at least. So let me just reiterate the point I make every year: that you should make every effort to resist the hype machine. You, the audience, gain nothing from buying into the hype, and they, the publishers, the enemy, do nothing but gain. So keep some perspective. When you watch a demonstration or an interview, try to remember in the back of your mind that every smiling charismatic face you see would probably continue knifing your corpse as long as it thought money might spill out of your guts.