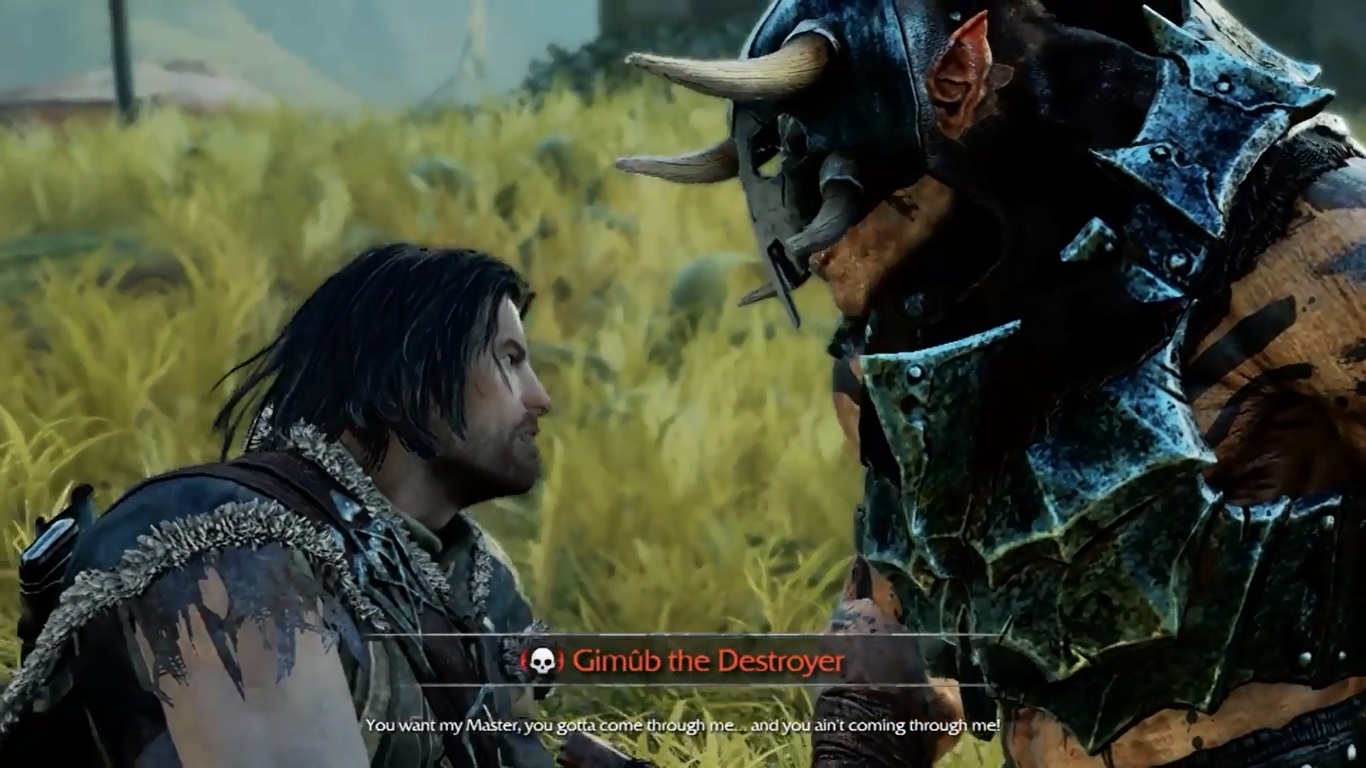 I'm into the concept of storytelling in a big way. I consider my specialty interest to be video game storytelling, and this, I think, is where the cutting edge of narrative evolution lies. Anyone who dismisses games outright while claiming to care about the development of art and culture is probably worth ignoring in all their future endeavors.

Why? Because of organic storytelling, the ability to give a unique narrative experience to every player. It's why I appreciate games that take a lighter touch with exposition, leaving us to fill in the blanks for ourselves, and I've taken an interest in procedural generation in a narrative format. Games that have fixed stories exhaustively told with lengthy cutscenes can have their charms, I suppose, but they're over with when the script ends, and a story that is being crafted on the fly around me and my actions seems to get me invested much more efficiently with considerably less effort.

Happily, Shadow of Mordor contains within it a comparison that proves my point. It's a game set in Middle-earth with what I hesitate to call an 'original story' running through the campaign, in which a generic grim hero gets some kind of generic grim revenge against something that we already know he's not going to beat because there wouldn't have been a Lord of the Rings film otherwise. In case I haven't made it clear enough yet, it didn't exactly fire my intrigue. As I write this, I'm having trouble remembering important details, like what our wife's name was, or why we were hanging out with that blonde lady. I remember a whole section where you went hunting with a dwarf but I couldn't tell you what it had to do with anything.

Meanwhile, I have very strong memories of what I was getting up to outside of the story, when I was messing around with the rather lovely 'Orc hierarchy' feature that defines the game. At various points throughout the campaign the game simply instructs you to sort out the local Warchiefs and leaves you to do it however you wish, and I appreciated that opportunity very much. I'd make a point of taking out each Warchief's bodyguards with elaborate plans that exploited their randomly-assigned weaknesses, partly to make the final Warchief assault easier, partly to imagine them feeling the noose tightening around their big sweaty necks.

Later on, though, the game grants you the ability to brainwash Orcs, and they stay brainwashed even when you're not around, allowing you to insert agents into the Orc hierarchy that can be activated at any time in battle, Manchurian Candidate style. And I remember very clearly what I got up to with that: it allowed me to forge the legend of Khosh the Drunk. I had created him in a sense -- he had been Random Orc #57 during a difficult fight earlier on, and had landed a lucky killing blow on me, which granted him immediate ascension to the low rank of named captains.

For a while, he was something of a bugbear. I made a point of going after captains who had killed me, because nemo me impune lacessit and all that jazz, but my first attempt failed thanks to his unexpectedly big entourage and he gained even more power. Things turned around on my second attempt, when I went to interfere with a duel he was having. I watched, unseen, to see which direction the duel would take, but Khosh realized he was in over his head quicker than I thought. His health reduced sharply, he became fearful and fled, losing the duel. While his opponent and the audience remained where they were to cheer and make like victorious football hooligans, Khosh ran blubbering into the wilderness, where I was able to catch up to him, grab him around the scruff of his neck and brainwash his fat arse.