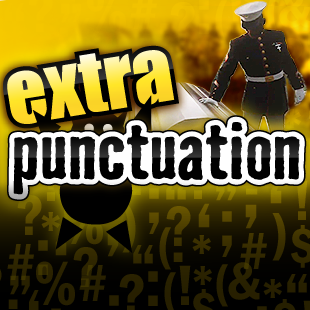 The Slow Time Event, then. A Quick Time Event, you'll recall, is a button prompt in the middle of a cutscene demanding you press it in time in order to not have to start the cutscene all over again, because the developers put all the effort into pre-rendering and animating what amounts to a shiny piece of tinfoil to hold up to the light and bewitch your inferior slack-jawed peasant mind, but forgot to add any meaningful gameplay to what ostensibly remains a video game. A Slow Time Event is similar, but there is no timer or reflex challenge involved. It is either nothing more than a mandatory pause in a linear section of gameplay until you have proved you know what buttons are and how they work, or the game simply continues regardless after a certain amount of time and you're left to wonder why you even need to be here.

It's the newest scourge of triple-A game design to have a name, although it's been with us for a while. Sometimes it disguises itself in the trappings of Quick Time Event. I think I'm right in saying that No More Heroes 2 has QTE finishing moves that are impossible to fail because the game pauses until you enter the right input. And then there's those things in Ryse: Son of Rome I'm not even sure how to classify, where the QTE prompt comes up but the execution sequence continues regardless. At other times, Slow Time Events have been used to hide loading screens, such as when the new Thief demands you spam buttons in order to jimmy open an inexplicably opaque window.

And then of course we have Press F To Pay Respects from CoD: Advanced Warfare. It lacks the excuse of loading times, or of trying to tortuously add gameplay to a scripted action sequence, it has no purpose except to immediately kill whatever sense of mawkish emotional weight the funeral scene was attempting to build.

All the flavors of Time Event are antithetical to good game design, and I shouldn't have to explain why anymore, but I will. Good gameplay is about establishing a set of rules and teaching them to the player just enough that they can intuit the next solution, one not so obscure as to be frustrating but not so obvious as to kill their sense of achievement. The moment you need to flash up a caption instructing the player of what button to press (at least, past the point that the standard controls have been tutorialized), you have failed.

It's not just that it's a single token moment of interaction in the middle of an otherwise linear sequence, because that has been done well; look at the final moments of Portal 2 for example. The ending puzzle is simply to click on the moon, but we didn't need a stupid immersion-breaking prompt instructing us to do so because we can intuit it with good old-fashioned deduction: clicking the mouse drops a portal, the moon is very bright and obvious in our view, there are no portal surfaces around that we can use but one of the central gags earlier on was that portal surfaces are made from moon dust, and in our most desperate moment we need a suitably drastic solution to reverse our fortunes, such as a portal to the moon. In comparison, nothing in Advanced Warfare up to that point has established that the F key can be used to pay respects. The only concrete rule the game has established at that stage is that clicking on things makes them die. 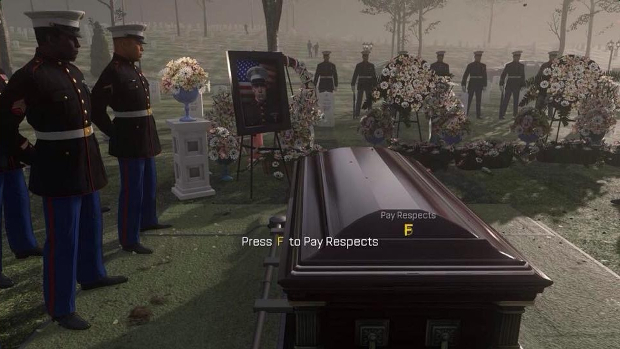 A screenshot of the Press F To Pay Respects prompt did a bit of a round on the viral image circuit, because it is inherently funny even without context. On one level because the viewer's first thought might be that the prompt is tutorializing a standard mechanic, and that F is the dedicated 'pay respects' button. It makes me think of a retro arcade cabinet with the big red buttons labelled 'SHOOT', 'BOMB' and 'PAY RESPECTS', as part of some clever satire on violence in the media.

In context, it's just one of a large number of STE's that pepper the in-engine cutscenes. The very first thing you do in the campaign is Press F To Push Buttons in order to get out of some kind of future space insertion vehicle. But what makes Press F To Pay Respects nonetheless hilarious is that it takes place in a scene that seems to be far removed from the gung-ho super shooty action in which the rest of the gameplay was happening. It's a sombre funeral for a friend being interrupted by the game slapping you in the face with a reminder that you're still playing a video game and that at any moment you could be asked to pull your assault rifle out and blow away some terrorists that were hiding among the mourners, possibly using the casket as cover.

In fact it's such a funny joke I'm willing to assume that it was intentional on the part of some bitter designer buried deep within the Chthonian depths of the corporate system, passive-aggressively lashing out with something that makes a mockery of the whole experience just subtly enough that it can slip unnoticed past the nose of the triple-A thought control machine. I will not entertain the notion that it was an intentional joke approved by the committee at large with the stated intent of taking things a bit less seriously. Alright, so things do get a little bit camp when Kevin Spacey starts shifting into his Lex Luthor personality, but in the case of Press F To Not Cry, I get a sense of bitterness from it because it is a joke roundly at Advanced Warfare's expense.

Just to bring up Portal again, Press F To Etc reminded me tangentially of GlaDOS, because her standard operating procedure was to attempt to emotionally manipulate the player in ways that implied she had a machine-like lack of understanding of how human emotions work (see: companion cube). And this is the same thing - it's a heartless machine attempting to go through the motions of drama based on vague, misguided notions of its trappings. Call of Duty has long been a franchise that drags the player along on sufferance, assuming that they're coming along for the ride without once looking back over its shoulder to check, and this is just another sign of that. The plot demands that you be sad. Here is the sad music and the sad rain and the sad funeral. Bing! You are now sad. Press F to confirm that you are sad. Sure, Call of Duty, I'll press F to be sad. Then I'll press Alt-F4 to be happy as fuck.