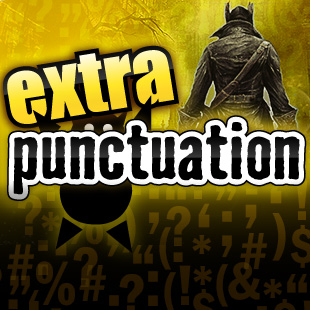 It's easy to say that FROM Software has essentially been continually putting out new installments of the same game ever since Demon's Souls (and possibly earlier since that's just the first game they made that caused me to become aware of them), because they all have the same 'feel', broadly speaking. Indeed, a friend who has seen me play Dark Souls came over recently and saw me playing Bloodborne, and confessed that, until I identified it, she'd have had no worldly clue it was a different game.

But the differences come through pretty clearly when you switch from one to another after having spent long periods beating your head against the combat. There was a considerable adjustment period for me, being still in gear for Dark Souls, in the early moments of Bloodborne while I determined where I needed to go to level up and upgrade weapons. My left hand groped for a shield that wasn't there as I floated on the edge of the enemy's attack range, waiting for an opportunity to run in, stab once and run back, hurling apologies. And it took time for me to absorb that this was the wrong approach.

I'll let you in on a little secret, fellow Bloodborne players - I didn't even know that gun riposting was a thing until I reached the final boss. I must have somehow missed the optional tutorial message in which it was mentioned; you know, the trademark FROM Software tutorial that mentions a technique but offers very little information on how to do it. I'd never really mastered riposting in Dark Souls and so it didn't occur to me to explore the concept here, and I make it a policy not to read other reviews or watch other people's gameplay videos in case it colors my own opinions before I can write them down.

In retrospect, that was my error, at least in the case of a FROM Software game; these things are designed for open discussion and info-swapping, that's why players are all encouraged to leave helpful graffiti next to boss doors and bottomless pits. It was only when the final boss was consistently using my entrails to decorate his flowerbeds that I decided it was time to start writing, and only by chance did I watch a brief gameplay video while stuck for inspiration. There I finally had gun ripostes demonstrated for me, along with the fact that the final boss wasn't even the final boss and if I'd completed a bunch of hidden objectives I had found no indication towards whatsoever then I'd have found the 'real' final boss. 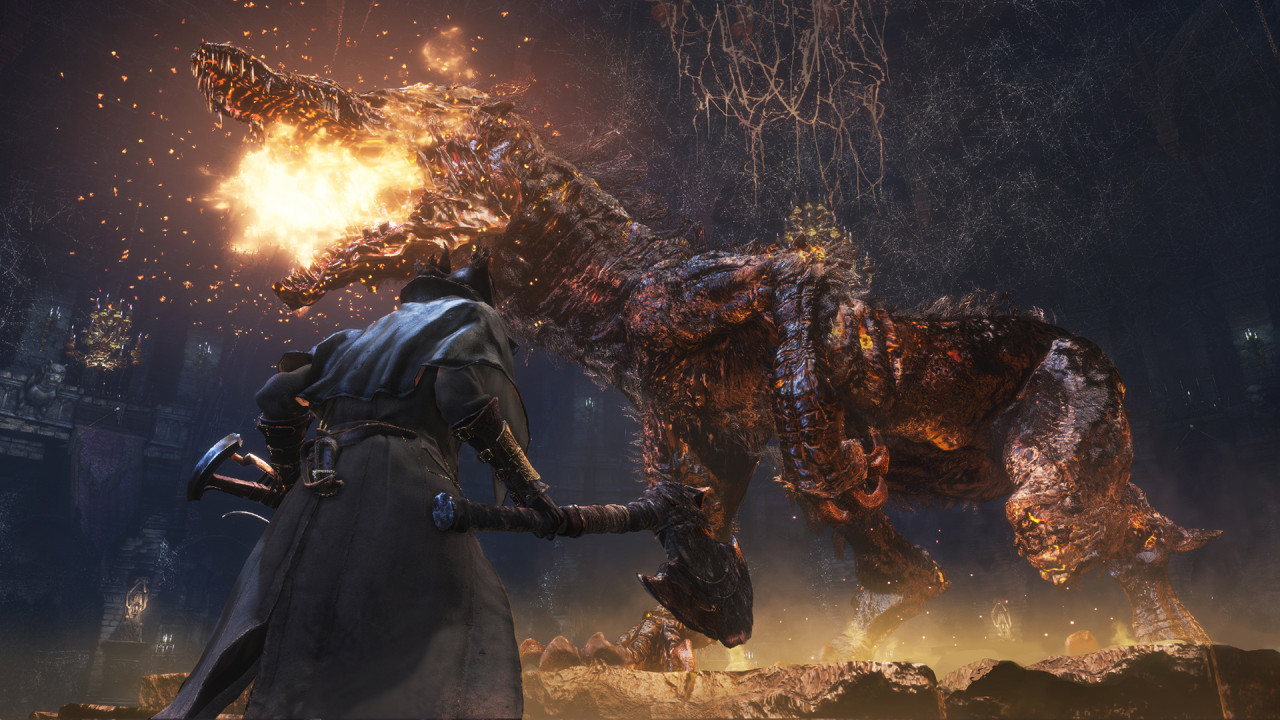 I then found that, having gotten through the entire game up to that point without using this very essential mechanic, I seemed to have trained myself to a hypothetical level of super-competence. Involving a lot of running up and mashing attack with a fast weapon lest the enemy get un-stunlocked long enough to mess me up, and when that didn't work, falling back on the fully-charged strong halberd attack to knock everything away. And the moment I added the gun riposte to my repertoire of combat techniques, I completely trounced the non-true final boss in a mere couple of tries. Hyper-competence was the only logical explanation, except possibly that the non-true final boss is kinda shitty.

So that was the state in which I left Bloodborne, feeling really positive about my enhanced ability to play a notoriously difficult style of game. It was in this state of mind that I noticed the recent re-release of Dark Souls 2: Scholar of the First Sin. What was I saying earlier about continually putting out new installments of the same game? This is something we're probably going to have to put up with for a while yet: big-name games that came out towards the end of the last console generation deciding they'd like to have another bite of the pie from poor suckers like me who actually bought the new consoles. After all, you haven't enjoyed anything properly until you've seen it with the kind of graphical polish that can only be detected with a side-by-side comparison and a magnifying glass.

Scholar of the First Sin goes a couple of extra miles, though. For starters, it comes with all the DLC chucked in, not unlike the Dark Souls 1 re-release, the Prepare To Die edition. And then it does something that, to my mind, is unprecedented in the world of re-releases: it also moves a bunch of enemies around. Not all of them, just enough to make an obvious difference. Some of the changes make sense, like how Heide's Tower of Flame is now infested with Heide knights. Others make less sense, like the placement of a dirty great dragon in the same area for no apparent reason. 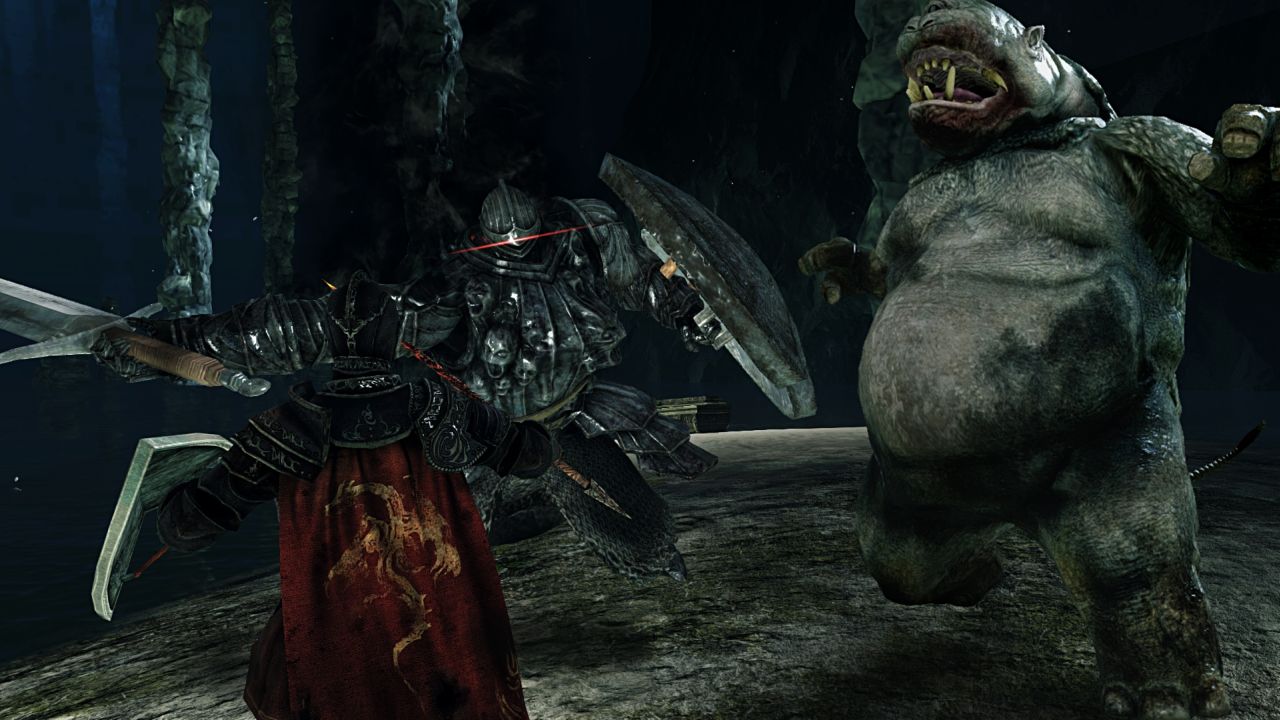 I wonder why no one's thought of doing this before, because it effectively adds a breath of fresh air to the next replay, and since there are so few games serving this niche FROM Software have built for themselves, us fans are in a near-constant state of replay. But at the same time, there's something unpleasant about it all. Either they're doing this for incredibly cynical reasons, to cheaply and artificially add a modicum of replay value in the hope it will sucker us all into forking out again, or they're doing it because they genuinely weren't happy with the monster placement first time around and wanted to fix it.

And if that's the case, it strikes me as a little bit fussy. It's the kind of attitude that leads to George Lucas's world, putting out new 'remastered' editions every time the season changes, endlessly adding tweaks and fixes in fear of it not being truly perfect yet like some nightmarish obsessive compulsion. Accept it has flaws and accept that the flaws are as important as every other part of it as a record of achievement and historical context. And now I've reminded myself that I should get around to finishing off Consuming Shadow one of these days.

But anyway, the point is, I started on Scholar of the First Sin because I've used worse excuses to replay a Dark Souls game, confidently deciding I'd have a go as a dual sword wielder this time. And that was when I realized the true damage Bloodborne had done, because as soon as I started exploring the Forest of Fallen Giants, I was getting passed around low-level enemies like a copy of Mayfair in a maximum security prison. I had to restart from scratch with about the easiest, most uncomplicated character build I could think of (mainly strength-based with a piece of sellotape holding down the shield button) to slowly ease myself back into the right groove.

So that's my word of warning, fellow replayers: Bloodborne might seem similar to Dark Souls at first, but getting really, unnecessarily skilled in the former will cause your well-honed ability to change gear in ways you might not detect. It's like trying to go back to normal wanking after discovering self-asphyxiation.