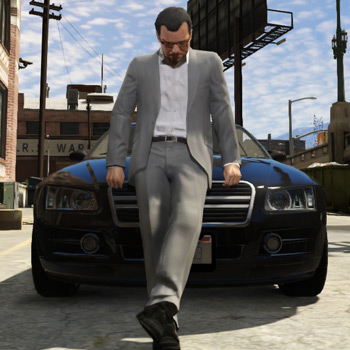 I get the feeling that long wait times is something the games industry is really hoping we'll learn to accept, and for once it seems like we really aren't. Not if I can help it, anyway. I will complain incessantly about spending most of GTA Online waiting for stuff to load and games to connect and players to join. Bloodborne's loading times were notorious, too, although I heard those have been patched; I wouldn't know, 'cos it's on the PS4 and I'd have to get off my arse to check. And I mentioned in my Ryse: Son of Rome review that the amount of time between inserting the disk and actually experiencing the gameplay was even longer than it had been back when I played cassette tape games on the Commodore 64.

As I reached for my iPad and unpaused Crossy Road for the umpteenth time while waiting for GTA Online to pull its finger out, I thought to myself that it would've been great if GTA had cut out the middleman, and put some kind of simple 2D minigame on the loading screen with which I could pass the time, like a sliding tile puzzle or series of anagrams. There have been games in the past that did something along these lines. The earliest example I know of was on the C64. A couple of cassette games I owned - I think Ghostbusters had it, and at least one other that escapes me - would load a Space Invaders clone called Invade-A-Load for you to play while the real game loaded in the background. Other examples include one of the Broken Sword games that had a little Breakout game for you to play while it installed, and there was an activity on Okami loading screens where you could try to press a button in time with the loading graphic. I think, in this new age of incredibly long loading and installation processes, it's time this concept made a comeback.

Yes, it's easy enough on a PC or new console to play some other indie or browser game while you're waiting for a big game to install, but I like the idea of these being an integrated part of the big game. It doesn't just have to be a timekilling distraction; we could be doing something constructive, towards the larger effort, in the time we're wasting. GTA Online itself has something approaching this idea. In the very first heist setup mission, one of your party has to drive a car while the other plays the hacking minigame, as practice for having to do it during the final heist. One wonders why the game couldn't come up with something similar for every time your co-op partner beats you to the driving seat and you're forced to sit and watch them smash into concrete barriers for the next half hour.

So, I'm going to go through some examples of waiting scenarios in modern gaming, and come up with ideas for gameplay that could be used to pass the time, but it has to in some way go towards the larger game, and it can't be so involving or give so much of an advantage that the player wants to play it for longer than the waiting time allows. Challenge accepted!

Scenario 1: Player is waiting for a large, complex RPG with in-depth character customization to install / load.

Since we're going to be spending the first 20 minutes of game time in character creation anyway, might as well get a head start on it. But rather than loading the entire character creator, which would probably be a bit of a load in itself, the game poses a series of text-based choices relating to the protagonist's past and childhood. These would then be reflected by the starting stats in the character creator, as well as the character's physical appearance, and whether the face is smooth and unsullied or displays eighteen years of broken noses and wet willies. If this is one of those games that starts with the literal birth of the protagonist, like Fallout 3 or Assassin's Creed 2, then we just play a little Custer's Revenge-style minigame of their parents fucking.

Scenario 2: Game needs to load while the player character transitions to a new area, or (in a sandbox game) fast travels across the map.

During loading, the player is presented a sort of interactive montage of 2D microgames, dramatizing various routine events taking place on the journey. These would depend on the means of transport. In a car or stagecoach, maybe they have to successfully steer around a rock in a path, or swiftly replace a wheel. On a ship, perhaps they need to bail out the bilges, accurately hammer a nail into place, or pull the correct thread necessary to untie a knot and release the mainsail. None of the games should take more than a couple of seconds, Wario Ware style. Upon arriving at the destination, the player is given a small reward reflecting how many microgames they successfully completed. If they somehow managed to bugger all of them up, they will instead take a health penalty and the driver or captain will give them a swift kick in the bollocks before they part.

Scenario 3: Player is watching the end credits because there might be an extra scene at the end and they're afraid to press skip in case they miss it.

Gameplay is over at this point, so instead of a minigame, we have something that's more of an activity for the bored. If among the credits the player sees a name they like, they can pluck it from the text and put it to one side. If they see another name they like, they can add it to the first, and then the game will generate hypothetical offspring of the two, whose names would be generated from the letters of the parents' names. For example, if we lived in a strange parallel universe where Silent Hills was actually released, and we combined Hideo Kojima with Norman Reedus, the game would inform us that their happy marriage resulted in two children: Eddie Houser and Morko Manjina.

Scenario 4: Player needs to wait in a lobby for a sufficient number of random players to join an online game.

I owe inspiration for this minigame from a Drones Club short story by P. G. Wodehouse in which club members bet on what the next person who walks into the club will be wearing. Again for small rewards of money or experience, the players that are already in the lobby place bets on letters of the alphabet, and when the next player finally joins, rewards are handed out based on how many times those letters of the alphabet occur in their name. Online gaming being what it is, one could probably win this every single time by betting on 'X' or any letter that occurs in the phrase 'lone wolf'. Now, this game obviously doesn't work if you know who's joining the server next because they're your friend and you invited them. In which case you could play another game in which, when the next player joins, you compete to see who can get them to say the word 'gay' without saying it yourself. Or convince them that the word 'gullible' is written on the ceiling.