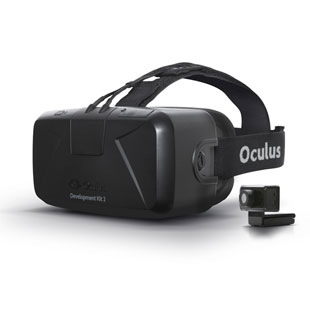 Wolfenstein: The Old Blood is a first person shooter. First-person games are games that simulate the point of view of the protagonist. VR is a system of hardware best suited for first-person gameplay that attempts to immerse the player in the protagonist's perspective by replacing their entire view and tracking their head movements. There; I have successfully justified devoting this column to my new toy. The latest gadget to multiply the number of trailing wires in my living room, tripping up the Roomba.

So I recently acquired an Oculus Rift DK2, thanks to a friend having to move house, and have finally gained the opportunity to try out something I have been supporting sight unseen ever since I knew it existed. No knee-jerk typical gamer-in-his-30's hater of innovation am I; I just feel that most attempts to innovate hardware in recent years have been on a hiding to nothing. The consoles struggle to improve the graphics enough to justify themselves, so it seemed obvious to me that innovation would need to look elsewhere, to the very means with which we play and experience the games.

From that, lest we forget, came motion controls, which from the very beginning I refused to accept as any kind of way forward for immersion. Immersion is about losing one's sense of self, almost to the point that we lose awareness of our body and are entirely in the game world, the player character an extension of our limbs. Motion controls, meanwhile, seem to be tailor made for providing a constant reminder of your real life body, your squishy, ageing, imperfect body. Which is fine for games like Dance Central and everything else you use to embarrass people at parties, but otherwise it's a bit of a dead end.

On the other hand, I theorised that playing with VR goggles, controlled with a button controller with which we are so familiar that it is practically an extension of our nervous system, would be an advancement in immersion. And not to toot my own horn, but I was pretty bloody right about that. With the headset on and noise-cancelling headphones for the audio, I'm so immersed I'm no longer in the room, I am a dark spot in humanity's collective perception. Kinda makes me paranoid, when I realise I've been in magic land for an hour and any number of people could have been calling my phone, knocking on the door, or tip-toeing around my oblivious ass stealing all the furniture.

This being the case, it's absolutely hopeless at perpetuating gaming as a social hobby, an idea that was already dying from the decreased focus on local multiplayer (online multiplayer is about as genuinely sociable as screaming insults from a footbridge at passing trains). By necessity VR is impossible to enjoy with another person; if you harbour any ambition to up your status by getting a friend or two around to see your new tech toys, a ritual that has so often been the backbone of the peripherals industry, then VR will swiftly leave you deaf and blind to a thick atmosphere of seething impatience all around you.

But anyway, games. And obviously the very first game I wanted to try was Elite: Dangerous, whose cockpit mechanics and extraordinary space scenery make it practically tailor made for VR. But while the experience of flying through space was indeed massively enhanced, the moment I actually tried to play the game-game as intended, I ran into some stumbling blocks. As I said in my review, it was impossible to map every single necessary function to my controller and I needed the keyboard on hand for things like operating the landing gear. But with the Oculus on, my keyboard existed only hypothetically. On top of that, there's a certain amount of visual quality lost when your face is pressed right up to the screen, and ED's trademark tiny-ass text became borderline unreadable. This was possibly exacerbated by me having to use the special lenses that compensate for my shitty vision; I couldn't wear spectacles and the Oculus at the same time because that felt like a robot was sitting on my face.

Before you ask, I didn't want to ditch the controller and stick to keyboard and mouse, partly because using the controller feels much more natural and immersive to my lizard brain, but also because, when I use the mouse to play a game on Oculus, I find it really difficult to un-learn the old instinct to use the mouse to look around, when now I can just look around to look around. The right analog stick is much better suited for exclusive turning purposes. This I discovered while trying out Subnautica, a first-person early-access underwater exploration survival type thing, that I thought would be fun. But there was no god damn controller support, and besides, my attempts to explore the magical undersea world were stymied by the game nagging me to find some air to breathe every thirty seconds. What a bore it is to have a respiratory system.

But the game I've really gotten back into thanks to VR is, of all things, AAAAAaaaaAAAAAaaaaAAAAA, the quirky base jumping simulator and permanent fixture of the top of an alphabetized Steam game list (if it weren't for 7 Days To Die, anyway). The huge colourful vistas that you fly through very fast and attempt to avoid smacking into while flying through very fast create a real sense of spectacle, and the VR's natural ability to enhance awareness of your surroundings helps knock up those high scores. That said, it is a game mainly about travelling downwards, so I do spend most of my play time looking down, hunched over on the couch with my head between my legs like I'm trying to sniff my own farts.

The other major down side is that for the first time in my life I'm finding it necessary to take a break from gaming every hour or so, just like all those disclaimers I've ignored over the years have told me to. I actually start feeling sick, especially with something as visually intense as AAAAAaaaaaAAetc. For years I've laughed at those pussies like my mum who got motion sickness just from being in the room when I was playing an FPS, and now I may have to take my place among the fuddy-duddies who can't keep up with new tech. Fuck that, say I - this is nowhere near enough to make me stop wanting to play VR. So I'll get used to it, or I'll throw up so hard that my bollocks fly out of my mouth. Either way I get a column out of it.