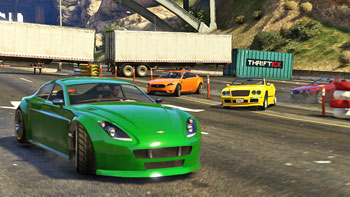 I realise that when we talk about making different styles of gameplay into turn-based systems, we are indirectly talking about how to turn them into board games. And at this point I should mention that I have played a board game based around car racing, although I forget the name. It was all about balancing speed with your capacity to turn and take a beating. I remember it fondly because I used to play it with an incredibly competitive friend of mine. On one occasion he was about to glide into first place after making all the best logical decisions, only for me to appear in the pile of dented burning scrap that had once been a car and rocket ahead with a terribly lucky roll that made my car essentially self-destruct in a directed fashion. It would have been a memorable victory lap before I exploded into a cloud of fanbelts and teeth.

As a bachelor who has only relatively recently discovered the benefits of cooking for oneself, and restricting Pizza Night to just a bare four or five days of the week, I've been surprised how much strategy and timing is involved in the simple act of cooking a nice simple steak and veg for dinner. I've got a whole attack sequence worked out, now. Drop steak in the pan, run over and start two-minute timer on the frozen vegetables in the microwave, run back and flip the steak every 20 seconds the way Heston Blumenthal recommends, etc. The only drawback I see to a turn-based cooking game is that after picking the "Leave to Simmer" option on the beef curry level you'll have nothing to do but pick 'Skip Turn' over and over again for the next half hour.

In a reversal of the established exercise, we consider how to turn into a real-time mechanic what virtually every game already presents as a turn-based system: conversations with characters. It's always 'pause the game until the player picks their next statement, NPC gives response, pause again for rebuttal', how about instead we direct the discussion from moment to moment. So if you're half way through an anecdote about a black guy you saw on a bus and you see the recipient's expression change, then you can slam on the 'backtrack' button and rework the sentence into a statement on civil rights. Or, while the other person is speaking, you could pick the perfect moment to interrupt them with some kind of devastating counter-argument, for example, repeating their own words back to them in a mocking tone of voice. Then putting your palms over your mouth and making farting noises until they leave.