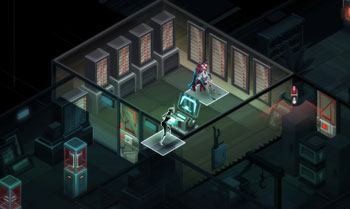 The combination of turn-based and stealth gameplay in Invisible Inc makes so much sense it makes me wonder why it hasn't been done before. Which large numbers of commenters will probably take as their cue to start listing titles, but while I'm sure there are turn-based games with stealth elements (even X-COM has stealth elements if you count those times when you see the enemy position without them seeing you), I can't think of many PURE stealth turn-based games. Pure stealth as in "No health bars for you, me old china, if a guard spots you and you aren't out of sight before the signal reaches his brain then you're going to be taking a closer look at the carpet."

I suppose 'stealth' is one of those things that can be defined a lot of ways. Pac-Man is arguably a stealth game. But the point is, it works in a turn-based format because stealth has a large element of strategic planning and forethought as you artfully manoeuvre yourself in such a way that you always stay out of the enemy line of sight. And while one can appreciate the challenge of having to come up with that kind of strategy on the fly, it's also nice to be able to think about it for as long as you need, and feel smarter than you actually are, which a turn-based model offers.

What turn-based loses in adrenaline-pumping moment-to-moment action it gains in accessibility for the slower, more tactical thinker. I'd like to see a turn-based game where, after every mission or combat sequence, the game plays a recording of the battle from an outside perspective, in real time, so that your five-minute musing turns into split-second decisions and you can see how smart you could, hypothetically, have looked. I'd call it L'Espirt D'Escalier: The Game.

Actually, thinking about it, it wouldn't look much like a real-time battle because in real-time battles people do not take it in turns to move, remaining planted firmly to the ground while everyone positions themselves in single file. I wonder, and here we provoke the commenters again, are there turn-based games where all the actions of your characters and enemies are queued up in a single moment, and are all executed simultaneously when everyone's ready? I suppose that's essentially just a real-time tactical shooter with a mandatory pause every few seconds.

Anyway. The point was, stealth gameplay works well in a turn-based format, and while I do like a challenging slice of real-time action, sometimes I want to relax and be able to carefully consider my moves before they are made, in a controlled fantasy environment where there's no real time urgency. Which is why it makes me wonder why the words 'turn-based' must it seems always be followed by the word 'combat'. It's not like shooting at each other from partially behind bits of old wall is the only situation in which one might need to strategically plan your moves carefully. To that end, let's think of some other, less combat-y kinds of gameplay that might also work in a turn-based format.

All those times I was being spun out into the dirt by more experienced players in one of the sports-car-only races around the prison in GTA Online, I'd think it would have been so much easier to make no mistakes whatsoever like the jammy git in front if I'd had time to decide if this particular point in the turn was the optimum moment to slam on the gas. Or to maybe point out to the guy just behind with designs on a side-swipe that neither of us will be getting any closer to the cunt up front while we're both doing somersaults on the hard shoulder like a pair of joyful spring lambs.