I know I keep advising not to get taken in by E3, but it's probably easier said than done, because the exhibitors are some of the richest in the industry who know every trick in the book for bypassing the higher parts of the brain and going straight for the animal 'wanty wanty givey givey' section. Even if all they have is a pre-rendered trailer showing little more than the back of Cloud Strife's stupid hairdo, they can still make the entire room go fucking berserk. Hell, the reaction to Shenmue 3 was no different and all they had to show for that was a begging bowl with a name taped to it.

Every single whooping bellend in that room probably consider themselves to be an intelligent person, and knew, on an instinctive level, that the proof of the pudding is in the eating, but nevertheless: They whooped. I know it's too late for this year, but there will be more E3s, along with other trade shows, and it's best to be prepared in advance. So I'd like to compile a short list of thinking points that you can occupy your higher brain with next time you see something being hyped. (While the rest of you is slapping the backs your hands together because you saw a slow fade in on a logo you recognized.) 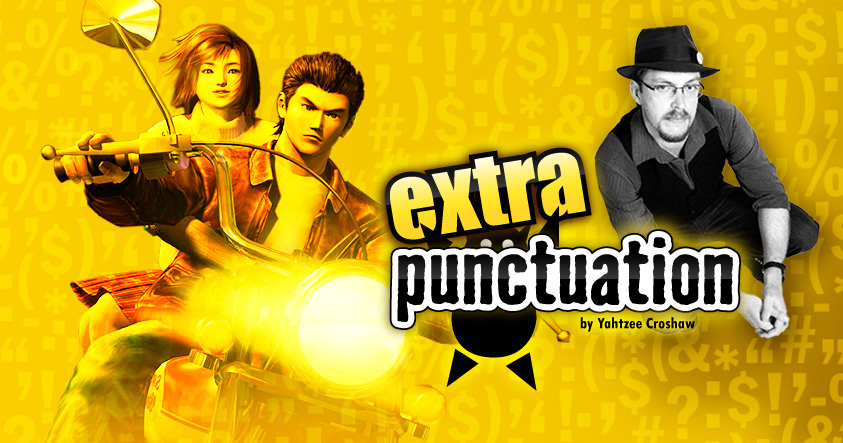 Consider what isn't being shown as much as what is

E3 is the Olympic games of hype. Every country (by which I mean publisher) is going to make sure that all their athletes are in absolute tippy-top condition to ensure the best chance of victory in the hype competition. All their strongest points are going to be fully polished and brought out to flex enticingly in the spotlight. If the athlete has any massive gangrenous growths extruding from their backs, those are going to be temporarily chainsawed off, or at least covered up with a big sheet and strategic camera angles.

In short, E3 is not a time to be coy. Especially when we're talking about extensive coverage of major games due to be released later the same year; if there's anything they can show that might increase sales on launch day, you can bet that they'll put it up there. Ergo, you can also be certain that anything conspicuously absent probably isn't internally considered to be a strong draw card.

A phrase to watch out for is "We don't want to spoil it." For example, if coverage of a game like Fallout 4 were to consist mostly of showing off new gameplay mechanics and the intro sequence, with very little being even hinted at regarding the game's larger plot and central narrative thread, then you might want to lower expectations in that area.

The question you have to ask yourself when see a new 'innovative' new gameplay mechanic is this: Whatever the player can achieve with this mechanic, could it also be achieved with the other, established gameplay mechanics?

That's the gimmick test. Gimmicks come in two flavours, which I call 'dominant' and 'recessive'. Dominant gimmicks allow you to achieve the same results as existing mechanics, but with less effort. Historically, the Assassin's Creed series has been the master of dominant gimmicks, as it introduced more and more fancy gadgets and weapons to remove more and more challenge from the sneaky murders, and this continues with the grappling hook launcher in Assassin's Creed Syndicate which doesn't do much more than remove the climbing and free running part of the challenge.

The recessive gimmick, meanwhile, is one that requires MORE effort than the existing mechanics, and is therefore almost completely vestigial. A good example of this is the advertised mechanic in Fallout 4 (again) wherein you can instruct your dog to fetch distant objects. In the video of this in action, doing so seemed to take longer and require more button presses than it would have taken to just walk over there and pick it up yourself, and then you would be in a position to explore the rest of the area around the object for more loot and drinkable toilets.

You all know the story of the Emperor's New Clothes. You know the little boy in the story who is the only one to point out that the Emperor's got his little Small Council flapping about for all to see. That little boy should be the patron saint of E3. Here is the most frightening thing to an exhibiting publisher - a fresh mind outside of the internal club in which years of design by committee and executive meddling has been self-assuring and yes-manning its way through a legion of terrible decisions, and that can't be clubbed into line by peer pressure or brand loyalty.

So if, like me, you saw the Oculus VR video showing third-person games, you might have thought 'Wait, why would you play a third-person game in VR? Surely if our head movements aren't linked to the in-game camera then we might as well just be playing a normal game with our face pressed right up against the TV". Then maybe you saw the person playing a normal game on a virtual TV in a virtual living room, and you thought, "That's really fucking stupid, you might as well not be playing VR at all, and the in-VR TV screen is going to be really low-res and shitty looking."

The temptation then is to start rationalising in your head. Well, we only saw a little bit, right? And it's being made by a very big company that I'm sure is full of people who know what they're doing. And I seem to be the only person thinking this is weird because no-one else is saying anything. But in truth, everyone else is thinking the exact same thing and your first instinct was correct. We live in a world of many, many silent intelligent people and many, many talkative fuckwits.