Here's a question that's had cause to gnaw at me lately: how intuitive does a game have to be? At what point does giving the player the freedom to find things out for themselves become being needlessly obtuse? I suppose this goes back to what I was saying last week about secrets in Yoshi's Woolly World, and how making secrets totally invisible until you touch them might be crossing the line into unreasonable territory.

I bring it up again because of the secrets in Cave Story. The secret combinations of choices and actions that lead to the best ending and alternative weapons are pretty unintuitive, to the extent that even exploring the entire game from top to bottom might not help you discover them by yourself. It's way too easy to accidentally make the wrong choice, often by skipping through text too fast, and then be locked out of the path you were aiming for. For example, as I said in the video, the first choice that leads to the ultimate ending is to not collect the jetpack at the moment it becomes available. Which is very unfair on us jetpack enthusiasts. And that's just the beginning; you also have to go in a room half-way through a waterway level that it's very easy to be dragged straight past by the current, and then fuck around with an untrustworthy mushroom. 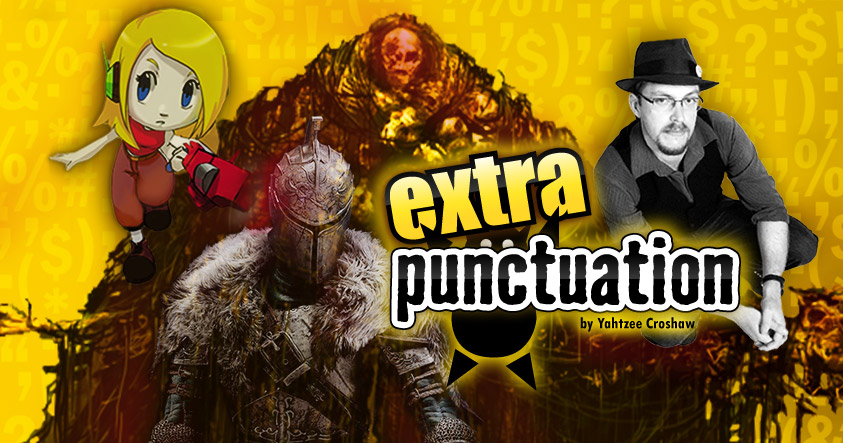 Now, I like a game that's challenging, and I like a game that's explorative, as you should know by now. A game like Dark Souls that keeps tutorials to a minimum and leaves you to discover everything at your own pace is precisely my cup of tea. Yes, occasionally you step on a hidden touchplate and get pounded into ground beef by a trap, but the game gives you the chance to anticipate it, if you've gotten to the right level of foaming paranoia. You could have spotted the extruding floor tile, or the mysterious slot in the wall next to it, and if all else failed you could have heard the click as you stepped on it and hurled yourself aside before the giant steak tenderizer fell.

The point is, it's fair, broadly speaking. What I don't like is when games are unfair. When a game flat out lies to you. And that's what Cave Story does. It's practically trolling.

Take the jetpack example. How that choice manifests is that you enter a room, the game pauses for a cutscene, and a character from earlier in the game teleports into the center of the screen. Then gravity takes hold and they fall downwards, out of view. Everything about this presentation is screaming, "Hey! Look at this!" from the pause, to the way the downwards movement of the character draws the eye, to the little thud he makes when he hits the ground out of shot, indicating that the pit isn't bottomless and we should come and look at what he landed on. To cap it all, even if you just come and look at him out of curiosity, you don't get to choose whether or not you take the jetpack once you talk to him, because you can't escape from the pit without the jetpack (or the fully upgraded machine gun). And bypassing the pit without a jetpack (or machine gun) requires a pixel-perfect jump.