Every now and again I like to base an Extra Punctuation around a single throwaway comment I made in the Zero Punctuation that I didn't put a whole lot of thought into at the time but which probably deserves closer examination. In this case, I said in my ZP review of Godzilla that surely making a fun game about being a giant Kaiju monster should be a no-brainer.

And then I picture Godzilla the game, standing with hands on broad, child-bearing hips and tapping its fake-looking rubber feet, saying "Oh, well, since this is so obvious, perhaps you'd like to instruct us on what we were doing wrong, Mr. I-design-games-as-well-as-write-about-them-as-my-YouTube-and-Twitter-followers-should-be-damn-well-aware-from-how-much-I-bang-on-about-it?" So, why not. Should be a fun little exercise. How would I make a game about being a giant monster smashing up a city? 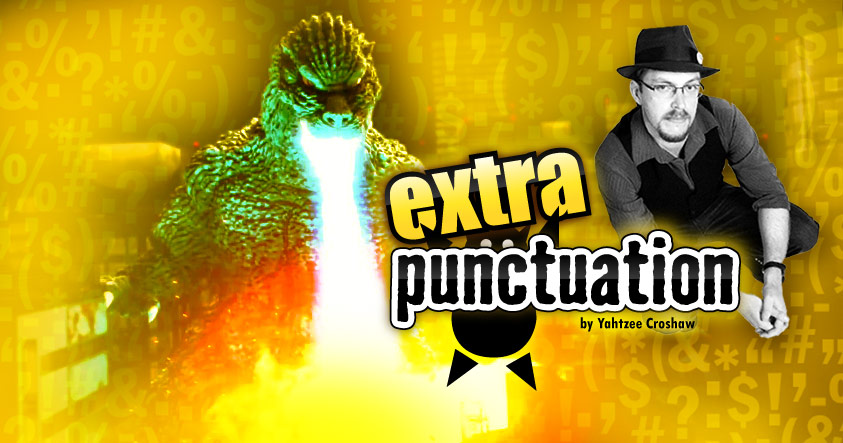 Well, I'd make it a sandbox game, obviously. I presume the intention is to embrace the utter cathartic glee of mindless destruction, as with games like Hulk: Ultimate Destruction and Just Cause 2 and Red Faction: Guerrilla, but always tempered by the fact that you can't destroy absolutely everything, for the simple fact that there would no longer be a sandbox for the game to take place in. Let's come back to that, shall we?

The most important thing about making a game about being, or indeed fighting, something really massive, is that it's not enough to just position them next to some small boxes painted to look like buildings; they have to FEEL big. And just to repeat myself, Shadow of the Colossus is the ur-example of getting this right. You really feel the weight of those big creaking things as they struggle to support themselves, and half-way through this sentence I've suddenly realized that I could be talking about your fat grandma's tits. 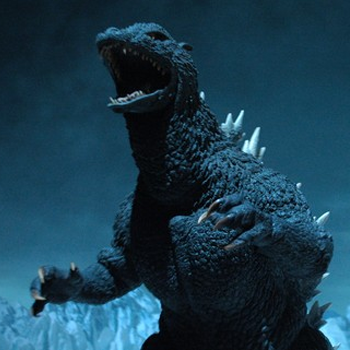 The usual tactic in trying to make something feel big is to have it move slowly. That's the quick easy way and it's probably not adequate. A massive thing doesn't necessarily only move slowly, although it does accelerate slowly; it can build up a fair old lick when momentum starts kicking in. Really, though, conveying that something is big just by having it move slowly next to some small buildings is speaking to the conscious mind, and when you're talking about creating an unexplainable, near-physical 'feeling', you need to be communicating to the unconscious mind, and that's something you do with little details.

I'm sure I've brought this up before somewhere but if you've ever played Fruit Ninja, that very satisfying feel of weight and juiciness you get from chopping a big swollen orange is conveyed by something like 20 small visual effects and sounds, most of which you don't notice, but your subconscious mind does. So when we're talking about making something feel big, the more details the better. Every footfall should resound with a bassy thud that shakes the screen, and we should be able to see every faint scar and fold on Godzilla's mighty ankle, as well as all the loose objects and body parts that have gotten entangled in his tread that dislodge and ping away with every step.

Now, the remaining problem that Godzilla the game discovered is that a character that moves or accelerates ponderously with poor response to controls isn't a whole lot of fun. Plenty of games have sections where you play as something huge or heavy - as in that one level of Psychonauts or the many action games in which you pilot a large vehicle or mech for a bit - but these are rarely used as anything more than brief novelty diversion, because after a while the ploddy pace becomes irritating. Perhaps for that reason it's necessary to let fun trump realism and avoid going for a 100% accurate depiction of a huge thing moving.

Happily, there are other ways to convey a sense of bigness. One is by using juxtaposition. I suggested in the video that having visible pedestrians running screaming around underfoot might have helped, because the subconscious mind instinctively knows how big the average human is supposed to be and can get a better sense of scale. Somehow, though, I doubt the game would have wanted to depict Godzilla mercilessly slaughtering humans, because it seemed to be really confused about who we were supposed to be rooting for.

Another way to create comparison for our huge size is to let us see ourselves growing to that size from a level comprehensible to human-sized things. It's like how you'll have a much better appreciation for how far you've traveled on a train journey if you stare out the window the whole time watching the scenery go by, rather than sleep through the whole thing. The Katamari games do this well, especially in the last level of We Love Katamari in which you start off human-sized and by the end of it are rolling continents and gods into your ball of surprises.

So maybe we could have started off as a small Godzilla and grown bigger and more powerful over time. The Godzilla game kind of does that, you start off 50m tall and by the end are around 90-100, but that's still starting off on the 'absurdly big' level and I never got a sense that I was growing. Maybe start off the size of, say, a van, then work our way up to building-sized.

Alternatively, since a tiny van-sized Godzilla would go against everything the franchise stands for, we could start the game controlling Godzilla wading in from the sea, with only his head from the nose upwards extruding from the water's surface. Keep the camera close enough to see all the little men hurling themselves off boats as he shoves his way through, and gradually draw the camera back as Godzilla moves towards the coastline and slowly rises into full view, water cascading from his titanic armpits.

But I feel that having Godzilla initially small would solve the issue of being able to destroy the entire sandbox the moment you arrive; just do the Katamari thing where you can't destroy anything bigger than yourself. So, to summarize, the ideal Godzilla game for me would be about sandbox destruction, watching yourself gradually rise from knocking cars around to teabagging skyscrapers, a focus on the fine details to create a real sense of weight and massiveness to your actions, and since we're dreaming about hypothetical ideals here, Godzilla should spend the entire game wearing a pimp hat.