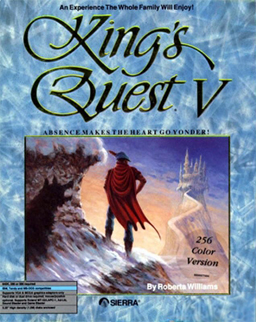 Back on the tortured pun express and it's not going to get much more tortured than that. Almost as tortured as our ears, since this is the first King's Quest with voice acting, but not the first in which actual voice actors were employed, rather than people who happened to be hanging around the office. Graham's unavoidable owl friend has a voice like he's constantly getting his bottom pinched. It was refreshing however, in this world where everything wanted us dead, for the player to be the one badly wanting something to die.

Point of Maximum Bullshit: There's an inn being run by villainous types (i.e. people with facial hair) and if you dare to go inside out of pure explorative curiosity then you get tied up and thrown in the basement. Where you will rot forever if you didn't throw a shoe at a cat earlier during the single opportunity you had to do so. Hope you didn't save after that!