Gotta love Metal Gear Solid. By which I mean it is now mandatory to love Metal Gear Solid. Certainly it is if you want to like Konami as a game developer because it's just about the only video game franchise they haven't completely pushed off a bridge yet, although the departure of Hideo Kojima certainly smells like the company warming itself up for a good hard shove.

Because the Metal Gear franchise is almost completely inseparable from Kojima. I know, because Metal Gear Rising: Revengeance was developed by Platinum Games with less input from Kojima, and you can immediately tell. Platinum Games I think couldn't help applying their usual sense of over-the-top irony, whereas what makes a Kojima game unmistakably a Kojima game is that he really doesn't seem to have any sense of irony at all. Everything's perfectly straight-faced with him, all the way through the farcically redundant dialogue and magic super powered ghost astronauts or whatever. 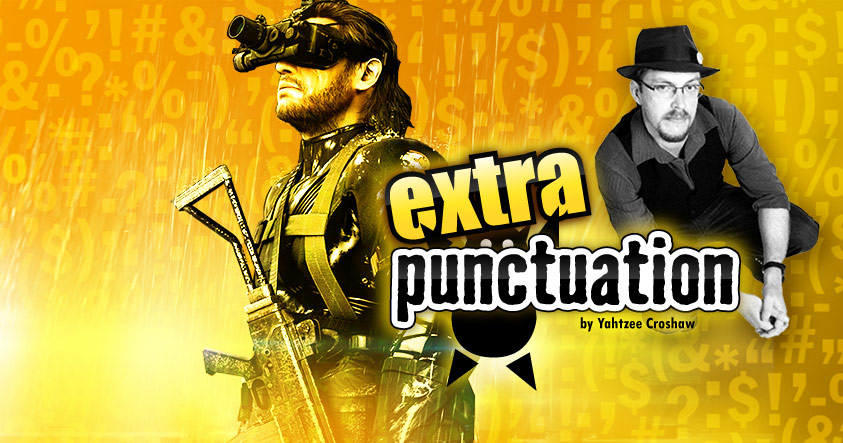 The fact that it's still, as of Phantom Pain, an auteur-driven series is why it retains my grudging admiration, even for all its total inability to retain a consistent tone, its bloated design, less than intuitive controls and, as we've established, excessive horrible dialogue. Seriously, drink every time a character in Phantom Pain says some variation on the phrase "In other words". Don't have characters say 'in other words,' Hideo, for Christ's sake; just have them say the right words in the first place, you big dolt. I know you've saved a lot of money over the years not hiring an editor but such people actually have a use besides spoiling all your fun.

But I digress. Sorry, I was trying to talk about why I admire Metal Gear, believe it or not. It's partly because, and feel free to jump on me if you think I'm wrong about this,that it's the longest-running currently active video game property with a connecting storyline that still operates within the same canon. Maybe you could argue that the same is true of Nintendo's properties, but the individual installments of Mario and Zelda and Metroid aren't telling a single ongoing storyline in any practical sense; they're mostly the same plot occurring over and over again. Metal Gear Solid V is still continuing the same storyline that began with Metal Gear on the NES, and that's got to be worth something. It's never been rebooted and very little of it has been retconned, which is pretty remarkable in this age when publishers cry reboot every time a new installment only buys them nine luxury yachts instead of ten. 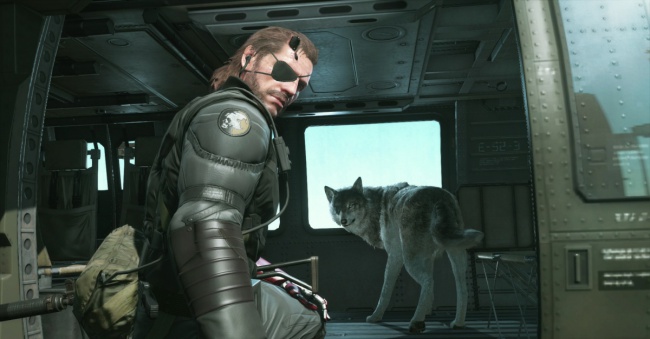 Of course, there are quite a few things about the series that might have benefited from a bit of strategic retconning. For me, the biggest monkey on the back of the series is that it seems to be completely married to the fact that one of the central characters is named Big Boss. He was introduced in the very first Metal Gear as Solid Snake's superior and (spoiler alert) turns out to be the big baddy, but Big Boss is the kind of name that such a character would have in a cheap Saturday morning cartoon. Worse than that - it's Axe Cop territory, like something a six-year-old would write. Or, perhaps more to the point, something that a writer of an early video game would come up with in two seconds to fill a space before he knocked off for lunch.

But not only has Hideo Kojima stuck with Big Boss as the character's title ever since, without quietly dropping it or having a single character sound slightly embarrassed as they say it, he came up with this whole tortured backstory around it. He's called Big Boss because he was forced to assassinate his mentor, who was a legendary tragic soldier called The Boss who sacrificed everything in the name of duty, and whose dream of a united world is the underlying spark behind the entire series and a whole slew of characters' motivations. And somehow The Boss got through her whole life without being driven insane by people making Bruce Springsteen jokes. 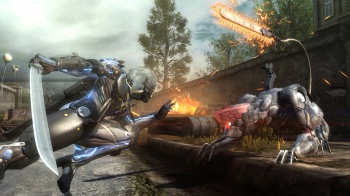 Big Boss, all the unexplained freakshow super soldiers, that business in Revengeance with the bare-chested senator hulking out and ranting about how great it is to be a Republican - it's all canon. Which is part of the fun, for me. When I played that bit in MGSV where Mr. Big Stuff black-bags the nerdy scientist and carries him off through a war zone, it was fun to think about how their respective sons will end up living together as gay dads and having a secret best bros handshake.

That does come with the proviso that there's a limit to what you can get out of playing a Metal Gear Solid/Rising/Whatever game if you're not up on the story so far. Certainly there's a lot that would be lost on you if you jumped straight into Phantom Pain as your first experience with the series. You'd probably raise a lot of questions that those of us with more familiarity with its predecessors have learned to simply let slide. Like, "why doesn't this make any god damn sense? And why doesn't that lady put a blouse on?"

So despite there being many things I appreciate about Metal Gear, I really have to wonder why it has such a high profile. Surely the niche of people who are really into the plot of Metal Gear and are familiar with the story of all the games thus far necessarily gets smaller with every new installment. So why is MGSV considered to be the current triple-A hit of the moment? Is it just the successful application of the hype machinery? Or, as I personally am beginning to suspect, is a lack of knowledge of the entire series backstory not as much of a hindrance as it with other franchises? Maybe it's popularly understood that, whether you've played no Metal Gear games before MGSV or if you've played every single one, the only difference in your reaction will be saying "This doesn't make sense" rather than "This still doesn't make sense".