It's been a pretty solid couple of weeks for video game storytelling. Soma did it for me with its existential sci-fi, monsters notwithstanding. The Beginner's Guide probably wasn't worth the ten bucks entry fee but the story made a point and made it pretty well. And of course there's Undertale, which I have been hankering for an opportunity to talk about at length.

It was pure bad luck that it came out around a time when there are plenty of other things lining up for a ZP-ing, but then I probably wouldn't want to do a big review of it, because that would increase the chances of spoiling or overselling it to people who haven't played it yet. I'll repeat the same advice I've heard given in several places about the game - if you haven't played it, do so before you learn any more about it. Like, right now. Before you read on.

Still here? And still haven't played it? I can't blame you, it's not an enormously good argument to sell the game with. I mean, how would you even know it's the kind of game you'd like? Well, if it helps, it is at time of writing sitting at the top of the Metacritic charts for PC games released in the last 90 days, and at number 11 of the all-time list. So you don't have to take my word for it. Now kindly bog off and play the sodding thing through to the end before the next paragraph starts. Both ends, ideally. 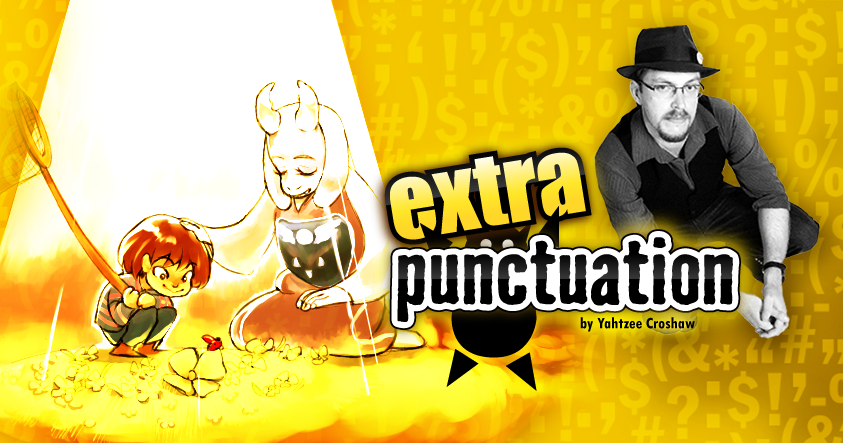 Right, so now we're all on the same page. Good, isn't it. But what is it that gives it its near-universal appeal? I'm going to go out on a limb and say it's probably not the graphics. It wobbles between basic and functional to just plain bad. Also, besides the exceptional music, the sound design isn't that great either. I wish it would make up its mind whether it's going to stick with the retro chiptune audio or not.

But by going with the graphics that it does have, Undertale is very, very, very reminiscent of Earthbound, the classic quirky RPG from the latter days of the SNES, which also had similar gameplay, similar quirky metahumour and a similar overtone of a complex world seen through the filter of childhood nostalgia (a cousin to my long-held 'big headed child exploring scary world' theory of automatic indie popularity). So is it just nostalgia for Earthbound that makes Undertale's success? It might be the starting point, but where Earthbound indulged the metahumour, Undertale pushes it up to 11. It seems to subvert every standard video game trope it employs, from the save system to the character naming to the unexpected crashes to desktop, for both comic and emotional effect.

Where it differs from Earthbound is that to like Earthbound you have to be able to tolerate turn-based RPG battling, which is always something of a tall order. Undertale has a similar battle system on the surface, but in practice your ability to dodge incoming attacks by moving your heart icon around has more in common with bullet hell shooters. It's a genuinely innovative gameplay mechanic that the game uses to its full potential, and as well as Paper Mario's timed hits system manages to hybridise turn based and live combat elements in a way that actually fucking works. But even it is not what makes Undertale really good.

It could be the incredible attention to detail, to the point that you can have played the game over and over again and still be finding new dialogue and little touches. Did you know that if you carry a Spider Donut from near the very start of the game all the way to the Muffet boss fight, you can end the fight instantly if you eat the donut in front of her? Or that, if you hang onto the Stick starting weapon even after swapping it for something better, you can use it in battle to instantly pacify dog-based enemies? And a lot of things will change according to your choices, of course, because every battle presents the option to either kill your enemy or (through various means) befriend them. And this is starting to rub up on the nub of the matter.

What really makes Undertale is the story and writing, which is on the one hand hilarious enough to suck you in from the start, and is also, by the end, rather heartfelt as well. I'm not too proud to admit that the Pacifist ending consistently makes me well up a bit every time I see it. And anything that can touch my stony heart deserves a good hard analysis.

Re-playing and re-watching the pacifist ending a few times, I managed to pinpoint the precise moment when the old lower lip gets to quivering. It's the moment when the main villain absorbs all the other monsters of the underworld to combine their power against you, and informs you that he can feel how much they have all come to care about the protagonist.

For some reason, that's the moment when it all hits home. As the game begins you're sold on the underworld as this dangerous place full of monsters that want you dead. And while that's technically true, the recurring theme of every 'boss' character you go up against is that they're all pretending to be something they're not. They're all complex, flawed, good-hearted people who have mostly been punished in the past for their naivete, and now feel forced to attempt to meet you with hostility to avoid any further tragedy. But when they meet you (or at least the pacifist version of you), they just can't keep it up. Because by refusing to fight no matter how much shit they throw at you, you're showing them that they gave up on goodness too quickly, and one by one you reach the real person inside.

The main villain is characterised up to this point (most clearly in the neutral ending) as completely irredeemable, because they lack a soul, and consequently the ability to love. But when they absorb all the other characters, they also start vicariously feeling their love for you, which is ultimately what redeems him. That's what gets me, I think, this triumph of kindness reminding people of who they were before tragedy twisted them, maybe that says more about me than the game.

After all that, there's also a bad ending, if you wantonly murder every single thing in the underworld, and I almost resent the game for having it. After doing such a good job at making me care about the characters, it seems borderline psychotic to include it at all. The fact that it exists means we have to do it if we want to see all the content. But on the other hand, the pacifist ending concludes with the game practically begging you not to delete your save and start again, and completing a genocide run has permanent effects on the game that persist even to ensuing games. So while I may resent the game for including the option of a genocide run, it doesn't seem to be as much as the game would resent ME for doing it.