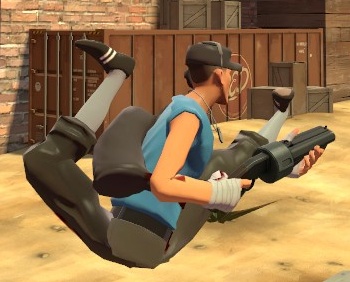 I think for a lot of people there's also appeal in playing the "lone wolf." I grouped with other people a few times out of necessity, to take care of some difficult quests. I'd rarely talk to them and I left without a backward glance as soon as my objectives were completed, which can make one feel appealingly mercenary. That's the best explanation I can come up with, even if it's incredibly pathetic.

So to summarize briefly, people who play MMOGs without socializing are a lot like goths in real life; angry loners who want to be angry loners where everyone can see.

"You always say that you never do online gaming and yet you've played/play TF2... wouldn't it only be far to at least check out other game's online play?"
- RottingAwesome

I'll let you in on a little secret. See, I love Team Fortress 2. When it came out it was probably the best-designed online shooter out there, and not just in gameplay, in every aspect of sound and visuals. I follow the TF2 blog and keep abreast of every new update and achievement list they bring out. I love the different personalities of the classes and am still hoping they'll bring out the last two Meet the Team videos at some point. But here comes the shameful secret part: I haven't actually played Team Fortress 2 since they brought out the first class-specific update, just under two years ago.

The first class update was the Medic, you may recall, which I thought would be great, because Medic was my favorite class to play. But the first time I logged on after the update, half of every team were Medics trying to unlock all the new weapons. And I couldn't play as Medic then because I didn't want to seem like some conformist, even though I'd been Medic before it was cool.

So I gave it time, waiting for things to level out again. But then came the Pyro update, and all the other updates, each one dishing out more and more funny weapons and maps I'd need time to familiarize myself with, and now there's so much extra shit going on since the last time I played that, frankly, I'm afraid to venture back in lest I be immediately flattened by twenty guys who've all spent the last two years mastering the double-piped bong rifle or whatever.

Please don't waste the internet's precious pixels by trying to convince me to get back into it. I definitely don't have the time these days, and besides, I'm really not sure I approve of what Valve is doing with all these updates - it's endless tinkering with something that already worked perfectly fine. And all the changeable hats business is affecting that sterling visual design I liked so much.

There was a painter in the 19th century called Richard Dadd, who famously went insane, murdered his father and spent the rest of his life in an asylum. There he created his most famous painting, "The Fairy Feller's Master-Stroke," which he worked on for nine years. It's absolutely covered in minute obsessive detail, and bits of it were re-done so many times that the layers of paint extrude unevenly from the canvas. And he still considered it an unfinished work. So the point I'm getting at is that Valve's work with Team Fortress 2 reminds me of a patricidal Victorian fuckhead.