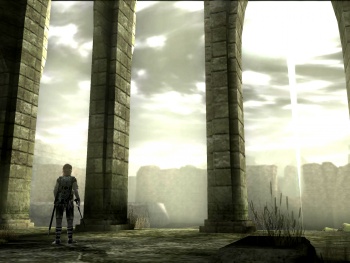 Batman: Arkham Asylum does something similar - you can scan things and you can pick up audio logs and character profiles, although the two things aren't combined as neatly as in Metroid Prime. And a file explaining Batman's motivations is of arguable necessity since The Dark Knight brought in more profit than a drive-in brothel on the corner of Money Street.

Now, my tolerance of Zelda tends to fluctuate, especially when it fails to go much further beyond the old predictable overworld-dungeon-boss routine, but Wind Waker struck a real chord with me. Its cartoonish art style holds up extremely well today (nothing ages faster than graphics that try to look realistic) and although you had to sail for quite unreasonably long distances from place to place, it gave the world a wonderful sense of bigness and discovery. This was shrewdly emphasized by islands only being added to your map after they've been visited. That is, after you've found the neighborhood fish, thrown him some bait, waited for him to swim around to get the bait, then sat through the same lines of dialogue and trademark Zelda triumphant sound effects - OK, maybe that process could have been trimmed down a bit, and a few more dungeons wouldn't have gone amiss, but the exploring sold it for me.

Silent Hill fairly uniquely uses exploration as a horror mechanic. You start the first game, your helpless daughter goes missing and your map indicates there are any number of streets, alleys and abandoned buildings she could have gone into, so all you can do is stumble through the fog panicking as you wonder what you're going to tell the wife. Then you discover that half the available routes are blocked by massive chasms of mysterious origin, and realize that the machinations of the town run far deeper than you thought. It's cracking stuff. But it seems the developers didn't agree and the games became progressively more linear as the series went on, with Silent Hill 4 even introducing unkillable chase monsters that actively prevent you from being able to take your time hunting through the rooms. That's like throwing people out of a pogo stick convention for wanting to ride pogo sticks.

Lastly, the missions of the Thief games I like most are the ones where all you have is a loot goal and a massively expansive map, multiple routes and couch change to be found on every coffee table and window sill. This particular facet of exploration is effectively combined with rising tension - it's very much apparent that your chances of being spotted increase the longer you hang around, but you haven't quite checked all the crannies yet and even though you've met the objective you've had your eye on this simply delightful pair of tap shoes lately ... and then of course Thief: Deadly Shadows made its environments tight and unexpansive because investment money and committee design seems to create this curious blind spot where fun is concerned.

So, exploration seems to be a running theme in my reasons for liking a lot of my favorite games. But Shadow of the Colossus is one of the only games that recognizes that exploration can stand totally alone as a gameplay mechanic. There's a very enjoyable freeware game called Knytt that also does, but it was directly inspired by SotC, so can hardly be said to count. And as I said, for some reason not everyone enjoys exploration for its own merits. There are people who just don't want to know unless there's always a big fat arrow in front of their face either pointing at something they have to murder or a closet wherein such things can be found. You know. Fuckwits.