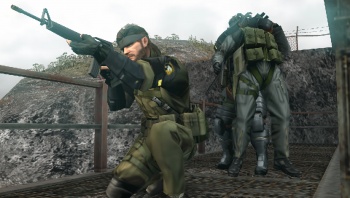 But this, too, wasn't particularly unusual in its attitudes. Things only got really weird in Metal Gear Solid 4, and the themed series of boss fights termed "Beauty and the Beasts." In these encounters Solid Snake has to fight animal-themed cybernetic robot suits being piloted by extremely attractive young women. All of whom have incredibly traumatic backstories - usually involving deaths of entire families, torture, cannibalism, all those larks - that has left them severely emotionally crippled and which the game recounts in intimate detail with what can only be described as "perverse relish." Then, after beating them, they slither out of the robot suits apparently wearing skin-tight plastic bin liners, and then they writhe around on the ground posing, sticking their chests and buttocks out for the camera, and rambling in incoherent madness. And then you shoot them. With your big gun.

Completely fucked up as this was, I allowed myself to forget about it, because it's hard to stay concerned about the emotional state of imaginary women from magic land. But then came a very specific moment early on in Peace Walker.

Let me set the scene. A man comes to Snake (or whatever he's calling himself now) with a 16-year-old girl in tow, a quiet girl in a red cagoule with a thousand-yard stare. He explains that she stumbled upon something she shouldn't have, and was imprisoned and tortured by the enemy. While they're talking about her in the cutscene, the camera focuses on her and some button prompts appear. I press them, the camera zooms in, and the girl's cagoule mysteriously disappears, revealing the suit she was wearing underneath. Then I noticed that I hadn't zoomed in all the way.

"Oh, Christ," I thought to myself. "Seriously, Hideo? Are we doing this now?"

I zoom slowly in and sure enough she gets stripped down to her underpants like a paper dress-up dolly. "Yep, we're doing this," I sighed, resignedly.

Later on, another cutscene occurs involving another attractive young woman, this one having recently broken her leg. Once again, those mysterious prompts appeared, and once again, zooming in made her clothing vanish - this time, just her trousers, mercifully. But then I could zoom in even further and her bones appeared, revealing the fracture. "Oh I see!" I exclaimed. "It's a medical examination! Well, that's all right then! Although somehow I doubt we will ever be called upon to diagnose an overweight middle-aged man!"

I still like that there are individual developers that have creative control. It makes a game experience more personal. It's just that this is only fine while the person in question isn't completely mad. This is what happens when such people slip the leash of editors. In other words, Hideo Kojima seems to be becoming the game industry's very own George Lucas. But even George Lucas wasn't this sexually fucked. At least George Lucas never stripped Princess Leia down to her pants and depicted her being forced into sex slavery - oh wait.

I didn't end up playing much of Peace Walker on my trip, but fortunately I was able to play through the entirety of Kane and Lynch 2 the day after I got back. Much obliged, Io Interactive. Although somehow I doubt you'll return those sentiments after the review.