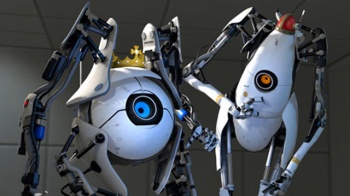 And when Portal 2 wasn't overdoing the plot it was retconning it. In Portal 1 I never got the impression that GlaDOS was supposed to be a credible threat. Her defining characteristic was that she was trying to be manipulative but completely didn't understand human emotions. She thinks she can reach you with the promise of baked goods or by painting a heart on the side of a box. When the test sequence ends, her attempt to kill you is, frankly, pathetic, and when you're running around behind the scenes, she can't even tell where you are or what you're doing. Now all of a sudden she's some facility-spanning omnipotent monster.

I'm not trying to ruin anyone's fun. Portal 2's still a very good game, and these issues, it must be said, only apply to the single player campaign. The co-op I found to be much more appealing and much more within the spirit of the original. There, the puzzles defined the progression and GlaDOS seemed much more like her old self. Still flailing to grasp emotional basics she grows openly suspicious (perhaps envious) of the two robots' growing friendship, trying ineptly to drive a wedge between them by praising them individually. This is partly why it's so fun to work together, because on top of everything else it's in defiance of her open disapproval. It almost seems like the co-op's story paves the opposite path to Portal 1 - rather than a hitherto unimportant plot suddenly acquiring a dark twist, the co-op maintains a little plot hinting at a dark twist but it just turns into goofy fun at the end, spoiler alert.

I think it's strange that more people don't see a sequel as an opportunity to extend the concept, to create a completely new story that could have even more of an impact than the last one. It's even more disappointing since Portal 2 acquired a whole bunch of more staff and resources than Portal 1 but just used it all to paddle around stapling an extension onto a story that had already been quite thoroughly and concisely told, which, as we've already established, will never be regarded as better than the original. I mean, prove me wrong. Name me one sequel to a game that wasn't left open for sequels, with the same main characters as before, whose story was regarded as better than the first. Let me help you out: there aren't any.

Gallery of the Day: 8 Sequels Coming To You In 2014 DrStrangelove 2 Comments