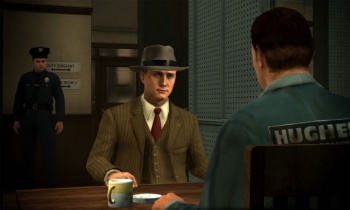 My hope is that L.A. Noire's example will lead to a resurgence of games driven by exploration, inventory and dialogue puzzles with more creative plots and refinement of the mechanics. Making the cases a bit more organic and a bit less linear with more appropriate opportunities for failure might be a good start. On that note, let me tell you about another of my unfinished solo game design projects. This is one I haven't worked on in a long time, which I say now lest anyone accuse me of only getting in on this now L.A. Noire has made it cool. It might be worth coming back to when I finish or get bored with my seventeen other dangling projects.

The intention was to create an investigative pointy-clicky game that actually required the player to use investigative skills, with no option to simply try every possible action in search of the correct one, a la most adventure games, but without being railroaded like L.A. Noire.

The main character is an amateur investigator - in my original test he was an ex-photojournalist - who has a personal connection to the victim of a strange murder and needs to solve it to find peace. He believes that the murder and several other seemingly unconnected ones are the work of a lone serial killer. He has very good reason to believe this, because the serial killer has contacted him, knows where he lives, and has made it clear that they will murder him if he hasn't figured them out after a certain number of days.

From there the game has a constant clock on-screen and a standard video game real-time system where a minute takes a couple of seconds. The player must hunt for clues and interrogate suspects and witnesses, all of which take time that brings you inexorably closer to your deadline. As with L.A. Noire, when you talk to people you can present pieces of evidence or click on highlighted terms and phrases in your notebook to get their input. After their initial comment you can press them for more information or get angry to see if that makes them spill anything else, but it's not a puzzle with only one correct approach - bad choices just make them lose patience faster.

This is the rub - you're an amateur investigator - your interrogation suspects are under no obligation to answer you. All of them have a 'patience' stat that gradually goes down as you talk to them. If it runs out they get sick of talking. If you didn't get the information you need, no biggie, but you need to wait a few in-game hours for the character to cool off before you can tackle them some more. A few in-game hours that might be small potatoes early on but become considerably larger root vegetables as your time ticks away. The game is almost entirely about info-gathering. Puzzling only comes into it when you have all that info - you solve the crimes by selecting two pieces of intelligence from your notebook and combining them into a conclusion. For example, you have the notebook items "The murder weapon was a giant spoon" and "Only Novelty Dinnerware PLC makes giant spoons" which can be combined to create "The murderer is a client of or associated with Novelty Dinnerware PLC". There'd be several alternative ways to find the right connections and have everything you need to confront the Cutlery Killer.

The game would need some careful writing because gameplay hinges on the player understanding the story and how everything connects, spamming every possible option would only waste time you can't afford to lose. It'd certainly be a mental headache for the writer. Perhaps I'll think more about it once I'm done with some of my less challenging ideas, like my other game I'm working on where you blast bunny rabbits into mulch with a shotgun at point-blank range.