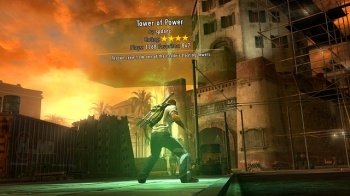 Since Sucker Punch have proved with the rest of the game that they definitely know what they're doing, I like to think that they ended things after Infamous 2 because they realized that the moral choice system was bollocks, but they'd already committed themselves to a sequel and it was kind of the whole selling point. I've never played their previous games before, the Sly Cooper series, but now I kind of want to. All in all, well done Sucker Punch, they deserve to be bigger names than they are.

Another thing I haven't mentioned yet - you may have noticed that this is one of those schizophrenic XP columns where I don't have any one subject that can fill the whole space - is the user-generated content. A set of tools are provided to allow you to create your own side missions anywhere within the Infamous 2 sandbox, and the potential seems to be quite extensive. You might expect me to say the same thing I said about Little Big Planet, that the majority of average people are talentless shits who just want to make pop culture references and giggle, but I actually really like this feature to Infamous 2. Yes, I did try a couple of player-designed UGC missions and they were basically just 'fifty monsters spawn in a big group, kill them all', but unlike Little Big Planet, the game isn't trying to base its entire experience around this.

It's just another extra thing to do. Creators don't have to design the environment from scratch because the entire sandbox is already there, and there's bound to be a location somewhere to suit any purpose, while players can ask the game to just scatter the UGC missions about without having to go out of their way to download them. When you play a sandbox game sooner or later you hit the time-killing period where you just wander around looking for shit to do, and with this system the period could hypothetically go on forever with constant new experiences. It doesn't matter how good they are as long as they pass the time. When I was poor and only owned one sandbox game, that being Spiderman 2, I scoured every inch of PS2-era Manhattan looking for anything other than those four or five bloody random missions to do and something like this would have been a great improvement.

However, the problem with these crowdsource concepts is that they're expected to self-regulate by having players rate the experience, and I noticed Infamous 2 suffering the same problem the GHTunes thing on Guitar Hero had - if you force the players to give marks out of five, virtually everything gets an average of three stars, because that's the default option and most people aren't committed enough to the game to not just skip through the dialogs as fast as possible to get back to gameplay. I've always distrusted the five star rating in its every aspect, so I had a brainwave: why not just keep it to a binary selection, like or dislike? Anyone can answer that, it's not like the 'strongly disagree/disagree/don't care/agree/strongly agree' arrangement that forces me to quantify my every feeling. Looking at the number of likes versus dislikes would give a much cleaner and more direct impression of a UGC mission's quality.