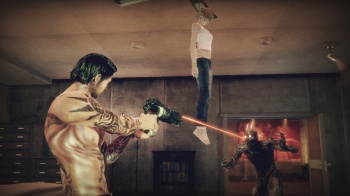 And that's just the protagonist. The Killer7 are inexplicably the only people (I'm going to say they're a group from now on for simplicity's sake) who can see the "Heaven Smile", a bizarre terrorist group consisting of many varieties of invisible naked suicide bombers who signal their appearance and attacks with high-pitched, maniacal laughter and are pursuing some anarchistic agenda to destabilize world peace. They are linked somehow to a larger conspiracy theory concerning the nuclear devastation of Japan, a plot by certain lingering Japanese interests to control election results in the United States, and the machinations of two competing godlike beings.

No two plot analysis guides on the internet seem to entirely agree on Killer7's larger plot and virtually every line of dialogue and piece of exposition seems designed to raise more questions than it answers. On top of that, the game only really visits the overarching plot at the start and end, and in between visits whatever the hell it wants. It could spend a chapter on a strange Texan cult-like community ruled over by a charismatic man with a giant afro, or one on a superhero battle between the Killer7 and a Power Rangers-style sentai team, with the cutscenes animated in a completely different style to the rest of the game because why the hell not. Connectivity between locations makes little sense and large recurring areas will appear to be inside spaces they couldn't possibly occupy in reality. And there's so much more I haven't even had space to mention, like the fact that the Killer7 routinely receive puzzle items from the talkative disembodied head of a teenage girl.

As I said, the actual gameplay is lacking. You can only move back and forth along strict rails and combat consists of standing in place and shooting the giggling Heaven Smiles from a first person perspective. The abilities of the different personas are poorly balanced, with odds being good you'll just stick to one or two go-to guys and only wheel out the others for extremely specific situational moments, such as the laughably easy puzzles. Challenge is all over the place with fights randomly alternating between monstrously hard and completely predetermined regardless of your actions. And gameplay is constantly interrupted by ghosts spouting gibberish for rather aggressively long periods. That's why I don't especially recommend Killer7 as a game-game. It's almost like the gameplay is following a stream of consciousness just like everything else.

As an experience, Killer7 stands completely alone. It might not be fun to play as a game and it might not make any sense, but goodness gracious is it a fascinating experience, and somehow the characters were interesting enough that I felt quite sorrowful for them at the end, despite knowing next to nothing about most of them. I guess when a character is a soft-spoken masked wrestler in a white suit and cape, you don't need to know any more to know that you like the cut of their jib.

Killer7 showed me something. I'm not sure what it was, but it made me want to see more of it, and I don't think much of it was in evidence in Shadows of the Damned. If it had been then it would probably have been about a bloke with seven heads battling Buddhist monks in a car park.