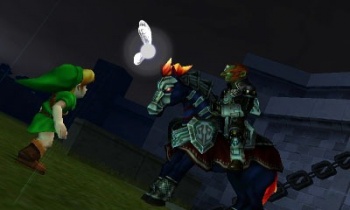 Some publishers can occasionally be relied upon to release old ports of their games on digital distribution networks, or a weighty compilation of 16-bit titles on a single disk. Elsewhere there are many sources on the internet for abandonware (free distribution of games that publishers no longer support) and emulation, but the legality on those are iffy. No iffier, mind, than publishers who clamp down on any attempt to abandonware release their games and then never re-publish them, or do republish them "remastered" Ocarina of Time style with modern trends and graphics.

My objection is that trying to keep your old games contemporary this way, papering over every slightest wrinkle of old age every few years, is hopeless. When you preserve a game for history it has to be preserved warts and all, because the warts are just as interesting as the good bits. They create a cultural context and an impression of the time and the attitudes of the people thereof. A re-release of Ocarina of Time with smoothed-out graphics and gimmicky 3D rubbish might be nice in some ways but culturally speaking it's virtually worthless. It's like a colorized version of Casablanca, or CGing Shia Laboeuf into Raiders of the Lost Ark.

You may remember me getting quite excited about the planned HD re-release of Silent Hill 2, to my mind the pinnacle of the survival horror genre, and of most game storytelling in general. But I have grown concerned at reports that the developers intend to re-do the voice acting. Yes, Silent Hill 2's voice acting is less than stellar. Guy Cihi, the voice of protagonist James Sunderland, was an American businessman living in Japan who was only at the auditions to escort his daughter. He'd never voice acted before and never would again. But you know what, that's a much more interesting story than some jobbing voice actor coming in, doing the lines and pestering the producer for cab fare home. That gives Cihi's role in the game's production an almost legendary quality. Besides, the stilted awkwardness of Silent Hill 2's dialogue gives the game an even more off-kilter feel that adds a lot to the intended atmosphere.

This is only partially related, but it makes me even more cross that the current console generation has basically completely fudged backwards compatibility, and it makes me additionally baffled that I'm the only one who seems to care enough to get stroppy. The PS2 had perhaps the best library of games in the entire history of the medium, but now their availability is subject to the whims of publishers and their flighty HDifying ways.

Games should be remembered, not remastered. They need an equivalent of the British Library, some organized authority apart from the publishers who keep a copy of every game ever made, in an emulated digital format that can still be played fifty years from now on our face-mounted augmented reality visors, purely in the name of cultural preservation. It could be that such an archive already exists through the combined hard drives of every gamer nerd on the internet. We just need someone who, unlike me, is willing to actually collate it rather than nag everyone else to.