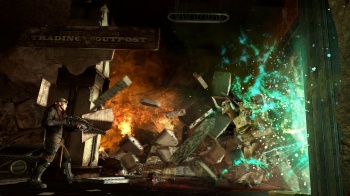 Whatever the case, what disappoints me is that Red Faction only seems to occupy that broad, primal end of the spectrum - smash up the entire building and shoot anything that runs out of the wreckage. We've proved we can make a destruction physics game where the idea is to smash things. The next thing we need to do, to prove our mastery of the art, is to make a game with destruction physics based around knowing when not to smash things.

Let's say you're an infiltration expert assigned to go into an enemy fortress to acquire some secret documents, in a sort of Thief 2 / Hitman-style mission structure with smaller open-ended environments. The fortress is constructed entirely from destructible physics objects that a certain amount of strength could bring down, some bits requiring more strength than others. The point being not to encourage the player to completely demolish the place but to allow almost infinite options. You could go through the main entrance, knocking out or killing guards, risking the enemy realizing the intelligence is compromised and changing their plans (as discussed in my previous XP on invisibility), or you could bash a hole in the basement wall and make your own way in where the guards don't patrol. Maybe you could even have every alarm, camera, light and electronic device hooked up by hidden cables to appropriate power sources. Then, with the right intelligence, break outer parts of wall and ceiling to release the cables and cut them. Then use a dangling one to swing over a gap, why the hell not? Throw in fire physics from Alone in the Dark and water physics from Hydrophobia and solutions multiply twentyfold. And then your processor explodes, but whatever.

If you stop worrying about linear paths and just concentrate on making a building as detailed in its physics as possible, players can find whatever paths they want. And it seems to me that there are an awful lot of reasons why you wouldn't want to completely demolish an enemy building. It's going to draw way too much attention, for one thing, and, as much as games like Assassin's Creed might refute this, the last thing an infiltrator should want to do is draw attention to himself. Even disregarding that, you might ruin or destroy some important object you're supposed to be acquiring. Or maybe your superiors want to be able to use the building afterwards - there's not going to be much consolidated staging going on inside a pile of brick dust.

Still, let's look at it from a less processor-melting perspective. Why not simply use destruction physics against the player? Perhaps in some kind of disaster simulator in the vein of Raw Danger or the mysterious I Am Alive, where you're inside a physics-driven building whose supporting wall has just collapsed and you need to get out safely. A sort of logical continuation of that old platformer cliché of ledges that collapse just after you step on them. Come to think of it, you could do this in 2D as an Iphone game - a sort of reverse Angry Birds where you're one of the pigs and need to make your way to the ground without falling too far or getting fatally bashed on the head by debris. You'd need to move around and shove the scenery selectively to get out while causing the least damage to the world.

Don't get me wrong, I like watching things collapse as much as the next man, but games have had physics for ages and you'd think we'd have gotten more sophisticated with it by now. Comes a time when you have to stop jumping on sandcastles and see if it wouldn't be just as much fun to live in one.