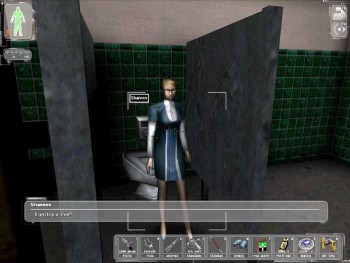 Not the Infamous kind of jerk that is forced to fit within strict, approved parameters of jerkdom, but a jerk that the game doesn't have a clue what to do with, and can only attempt to get through the game before they do too much damage. What moral-choice games like Infamous don't realize is that part of the appeal of acting like a jerk in a game is that we feel we're bucking the system the game laid out for us. It's a test of the promise of freedom. It's a form of emergent gameplay that adds to the sense of the developers' willingness to let go of the steering wheel now and then, and emphasizes the closer bond between player and creator that has always been a strength of PC gaming.

I was in idle conversation with someone recently when he caught me off guard by blaming Half-Life for the current state of overly cutscene-heavy gameplay. And it seemed like he couldn't get any wronger, because like most Valve games Half-Life very deliberately has no cutscenes and almost never takes control from the player. But then he pointed out that there are several moments in Half-Life - and more so in Half-Life 2 - when you're trapped in a single location and aren't allowed to leave until the non-player characters have finished talking at you or among themselves. Which is fair enough, I suppose, but these pseudo-cutscenes never bothered me too much. Why? Because I was free to act like a jerk. Mess with people's ornaments, throw boxes at them, stand on top of things they're trying to use. And this made their scripted actions all the more entertaining as they now had an undercurrent of desperation as they determinedly ignored the fact that you were discharging firearms into the wall right next to their head.

Even better are the games that make an effort to call you out on this sort of behaviour. Deus Ex itself had a generic irritated response most characters had for weird behaviour ("Are you OK, JC? You're acting weird," Alex Jacobson would say as you stole all his possessions and murdered his cat) but there were some quite famous specific examples. If you went into the UNATCO women's bathroom, your commander would specifically ask you not to the next time you spoke to him. More gratifyingly, if you did something like kill the terrorist leader you were told to take alive or murder all the hostages in the subway station, then JC would actually try to justify himself when his NPC friends got mad at him, usually sounding like Judge Dredd in the process. And then, dear readers, the challenge was on. Alright Deus Ex, if you're so smart you included dialogue for murdering the hostages, how about if I pick up one of the corpses and leave it in Paul's shower? Got dialogue for that? Hm? Didn't think so.

Now, obviously I've played Human Revolution by this point, and I don't want to talk too much about it until the video is out, but I will say this now: it's very gratifying to me that you can pick up vending machines and throw them at people. Tell me the image isn't a little bit amusing: the employees of Sarif Industries huddled together in the staff canteen, living in constant fear of the door suddenly flying open and that all-too-familiar voice bellowing "WHO'S THIRSTY?!!!"