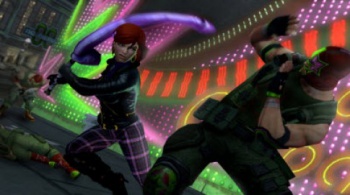 My theory is that every game experience will have all three of these aspects to varying levels of intensity. But the best game experiences will be the ones that balance all of them equally, all three bringers of the fun working in unison. Painkiller, for example. Various levels of challenge, it's very gratifying to launch rockets into shepherded throngs of evildoers, and the excellent environments give the context (shame about the actual plot, though). Or my old favourite Prince of Persia Sands of Time. The story's top notch, and I get both challenge and gratification from executing a perfect sequence of acrobatics in an unbroken smooth flow.

While thinking this over I tried to come up with an example that sits right in the middle of the three, and came up with the slightly odd example of the surprisingly good ending sequence of Halo Reach. When you're abandoned alone on the occupied planet and the ending only comes after you die, leaving you to hold out for as long as you can within gameplay as a final melancholy challenge. Also gratifying in a sort of heroic tragedy kind of way (and in the killing of the aliens if you're some kind of massive racist) and of course it would be nothing without context.

I hope you're still picturing that XKCD-style triangle chart because now I want you to imagine Saints Row 2 being pretty much in the middle, and that's why I liked it. It had challenge, it was certainly very gratifying, and the context of your customised character clawing his (or her or its) gang up to the dizzy heights made it involving. Saints Row 3 you have to imagine being nudged a little too far from the Context point and a little too close to Gratification. So while it is still fun in a ragdolls to the wind kind of way - there's hours of fun to be had just in running around doing sprinting takedowns, especially the one that ends with your character doing a cheeky swimsuit pose and smile for the camera - it's no longer fun on the same number of levels. And even if there's still enjoyment in it, a sequel should always be admonished if it turns out to be less than its predecessor. Because that is a series that is not moving in a forward-style direction.

You know, I have a long-standing grudge against the concept of awarding review scores to games, because I think it represents everything that's wrong about videogame reporting by treating every given game like some kind of kitchen appliance whose chopping blades have been slightly rearranged since the last generation and are now therefore precisely 1 point more efficient at dicing sweet potatoes. But if I did finally knuckle under to those bean counters at Metacritic, this is exactly how I'd give scores to games. Three separate marks out of ten for Context, Challenge and Gratification. None of this buggering about with graphics or sound or anything else as consequential as the color of the wallpaper in an operating theatre. Of course what I would definitely not do then is combine the three scores into some kind of "overall" value, because that's totally fucking meaningless. That'd be like having a meal where the main course was tasty but the dessert was disgusting, so you give it a final review of TASTGUSTING.